MayDay: Amitabh Bachchan Shares Still from the Sets of Ajay Devgn Starrer, Remembers His Iconic Film Deewar Which Was Shot at the Same Place 42 Year Ago

Amitabh Bachchan on Monday revealed that shooting for his upcoming film MayDay has taken him to the same spot where he shot iconic scenes of the Bollywood classic Deewar 42 year ago. 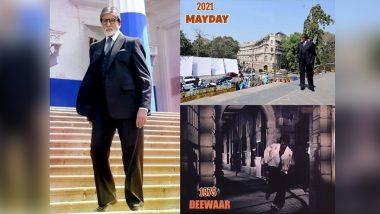 Amitabh Bachchan on Monday revealed that shooting for his upcoming film MayDay has taken him to the same spot where he shot iconic scenes of the Bollywood classic Deewar 42 year ago.  "Looking back on time .. see that arch in the stone building at the back .. in a shadow loop .. Police Officer Shashi Kapoor shoots his brother Vijay in DEEWAR at that spot in film .. today shooting same place for MAYDAY... 42 years later... Deewar made in 1979 to today 2021...Been a while," he wrote on Instagram, along with many of himself on location for his upcoming project. Mayday: Boman Irani To Play The Role Of An Airline Owner In Ajay Devgn’s Film

The iconic actor also took to his official blog to revisit memories of working on Deewar. "The works of the day of Mayday... the place of several and the most memorable in the arch at the back in the architecture , the bullet in the back, the brother, the temple the Mother, the death and the finest written... so much past and still the," he said. Ajay Devgn Wraps MayDay’s First Schedule by Sharing a Pic From the Film’s Set

MayDay reunites Big B and Ajay Devgn, who have worked together in Major Sahab, Khakee, Satyagraha and Hindustan Ki Kasam. The film sees the two stars collaborate after over seven years since Satyagraha released in August 2013. The film is directed and produced by Ajay. It is said that Ajay will be seen as a pilot in the film. Rakul Preet Singh will be seen as a co-pilot in the film, billed as an edge-of-the-seat drama. Details about Big B's character is under wraps.

(The above story first appeared on LatestLY on Feb 08, 2021 04:55 PM IST. For more news and updates on politics, world, sports, entertainment and lifestyle, log on to our website latestly.com).