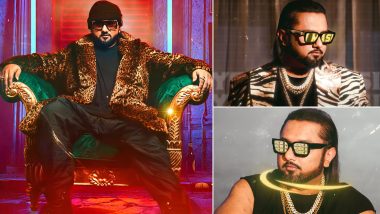 Singer and rapper Yo Yo Honey Singh is on a roll these days. After releasing his last single "Loca", the "Angrezi Beat"  hitmaker has dropped yet another son, in collaboration with Neha Kakkar and Russian singer Ekaterina Sizova. Titled "Moscow Suka" the song is bilingual with lyrics in Punjabi and Russian language, a first. Honey Singh had announced the song on April 12, 2020. Yo Yo Honey Singh Birthday: From Angreji Beat To Makhna, These 5 Tracks By Him Will Get You Grooving (Watch Video).

Honey Singh had even teased his fans about this collab of his and had asked the fans to guess which international language would he be collaborating with.

Check Out Honey's Announcement Below:

Honey Singh's last release, "Loca" has amassed 89M views on YouTube in only a mere month of its release. Yo Yo Honey Singh became a huge name with his dance numbers in Cocktail ("Main Sharabi" and "Angrezi Beat") and Chennai Express where he gave a tribute to Thalaivar Rajnikanth in the song "Lungi Dance". After a few independent numbers later on, the singer took a break from the limelight only to return with party chartbusters namely "Dil Chori" and "Chote Chote Peg" in Sonu Ke Titu Ki Sweety. What do you think about Honey Singh's latest release?

(The above story first appeared on LatestLY on Apr 14, 2020 04:56 PM IST. For more news and updates on politics, world, sports, entertainment and lifestyle, log on to our website latestly.com).