Actor Ishan Mishra, who has recently made his film debut with Janhit Mein Jaari starring alongside Nushrratt Bharuccha, talks about his upcoming project and the kind of responses and praises he is receiving for Janhit Mein Jaari. 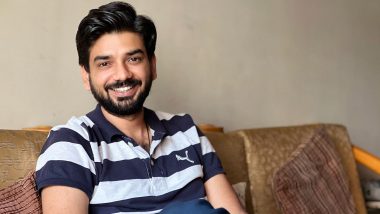 Actor Ishan Mishra, who has recently made his film debut with Janhit Mein Jaari starring alongside Nushrratt Bharuccha, talks about his upcoming project and the kind of responses and praises he is receiving for Janhit Mein Jaari. He will be next seen in director Santosh Sivan's Mumbaikar which stars Vijay Sethupathi and Vikrant Massey and is expected to release soon. Maamanithan Movie Review: Vijay Sethupathi – Seenu Ramasamy’s Film Receives Mixed Response From Critics.

Talking about the same he says: "The next project coming out is Mumbaikar. It's a feature film directed by Santosh Sivan. I'm playing a very interesting part in the film and I'm believing that people would love that. We also have some great actors in the film and I really enjoyed working with them. So, I'm really looking forward to it. Then there is a feature film for which I'm currently shooting in Madhya Pradesh but it has not been announced yet. It's altogether a different role and the film would be well received by audiences because it has a very different take on a very different topic."

Sharing about the kind of responses he is receiving for the film he says: "Honestly, I haven't got the chance to watch the film yet as I'm shooting currently but will definitely watch it by next week. Yes, I have received many good responses from the audiences and people who have watched the film. I have heard great things about the film and they have told me that there's a laughter ride. Also we can see people laughing all over the film and that's really great news to hear."  Mumbaikar First Look Out! Vijay Sethupathi, Vikrant Massey, Sachin Khedekar Movie Is An Ode To People Of The City That Never Sleeps (View Pic).

Expressing his joy on making a film debut he adds: "I'm really feeling very happy after debuting in this. I have received lots of calls and texts praising the film and my work. I'm really happy to be a part of this storyline and be a part of the film which has a great team of producers, directors and cinematographers. Working with some of the stalwarts in the industry is a feeling of gratitude for me. People are loving the film and it will be a great social message along with a great entertainer."

Talking about the kind of content he wants to do in future he says: "Noir is the favorite genre that inspires me and I watch it regularly over and over again. So I would really love to be a part of such a content. I also prepare dark comedies and be a part of the films that have dark comedy throughout its entire structure. Also I want to be a part of a Sci fi film and am waiting for the day when there are many more Sci Fi films produced in India."

(The above story first appeared on LatestLY on Jun 28, 2022 02:40 PM IST. For more news and updates on politics, world, sports, entertainment and lifestyle, log on to our website latestly.com).