Ajay Devgn and Kajol's daughter Nysa performed in her school in Singapore and the songs that were chosen were from Shah Rukh Khan and Kajol's movies. There was also Nagada from Jab We Met. Check out the viral video here... 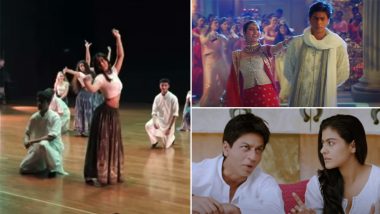 A Nysa Devgn video is doing the rounds of the internet which has the girl dancing on a medley of a couple of Bollywood songs. While there's "Bole Chudiyan", "Sajda" and "Naina" from Kajol and Shah Rukh Khan's Kabhi Khushi Kabhie Gham and My Name Is Khan, there's "Nagada" from Jab We Met as well. The video is a performance by Nysa and her college friends. Ajay and Kajol's daughter studies in Singapore. The formations look quite rehearsed and are on fleek. But we feel there could have been a little more energy. Bollywood songs are nothing if not energetic and when it comes to these SRK-Kajol tracks, they need even more agility. But there's always a next time! Nysa Devgan’s Recent Ethnic Appearances Can be Summed up in Three Words – Pretty, Pastel and Pristine (View Pics)

When Ajay was asked about Nysa's Bollywood aspirations, he had said that presently she is completing her studies. At present, films don't fall in her to-do list. Kajol however had left it all on her daughter. She had said in an interview that if films are what Nysa chooses, she will support her daughter. Judge Me, but Don’t Judge My Kids, Says Ajay Devgn for His Children Nysa and Yug

Well, we aren't certain if Nysa has any Bollywood dreams, but if she does, she has the talent to dance. That's one tick mark on the list, isn't it?

(The above story first appeared on LatestLY on Apr 12, 2021 05:05 PM IST. For more news and updates on politics, world, sports, entertainment and lifestyle, log on to our website latestly.com).