August is coming to an end and we have some big OTT releases lined up before the month ends. Sanjay Dutt, Alia Bhatt's Sadak 2 has received a huge backlash following late actor's Sushant Singh Rajput's death probe and Mahesh Bhatt's film trailer stands as the second most disliked YouTube video in the world. 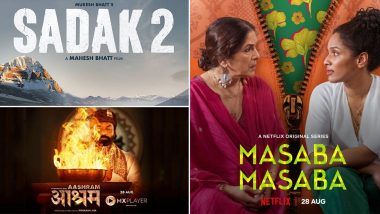 August is coming to an end and we have some big OTT releases lined up before the month ends. Sadak 2 is a sequel to Mahesh Bhatt's 1991 classic that featured Pooja Bhatt and Sanjay Dutt in the lead. The film is all set to premiere Disney+ Hotstar on August 28. Next big release is designer Masaba Gupta's upcoming Netflix show Masaba Masaba. The show is a semi-fictionalised version of the designer's life in which the mother-daughter duo of Masaba and mom Neena Gupta play a version of themselves. Helmed by  Wake Up Sid writer Sonam Nair, Masaba Masaba also stars Pooja Bedi and Rytasha Rathore in major roles. The series is all premiering on Netflix on August 28. Sadak 2 Song Dil Ki Purani Sadak: On KK’s Birthday, Here’s His Latest Song Featuring Sanjay Dutt And Pooja Bhatt’s Sombre Romance

After impressing us with a stellar performance in last week Netflix release Class Of 83, Bobby Deol is back again with his MX Player series Aashram. Directed by Praksha Jha the nine-episode series stars Bobby in the lead role as Kashipur Waale Baba Nirala who derives his power from the influence he has over the lower strata of the society. Aashram is all set to premiere on August 31. Next is Virgin Bhaskar Season 2 which is coming to Zee5 on August 29. It stars Anant Joshi, Rutpanna Aishwarya and Jiya Shankar promise a funny and naughty love triangle. Below is the complete list of the OTT releases of the week. Aashram Trailer: Bobby Deol As A ‘Godman’ And ‘Conman’ In This Prakash Jha Series Looks Promising (Watch Video)

2. All Together Now: Netflix on August 28

(The above story first appeared on LatestLY on Aug 24, 2020 05:42 PM IST. For more news and updates on politics, world, sports, entertainment and lifestyle, log on to our website latestly.com).