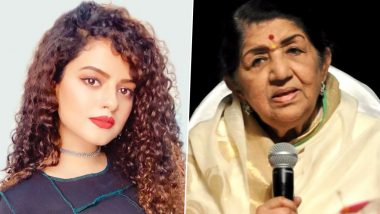 Popular singer Palak Muchhal is feeling honoured to pay tribute to the Nightingale of India Lata Mangeshkar on the eight-part series Naam Reh Jaayega. She recalls Lata and shares what she imbibed from the legendary singer. As she mentions: "It's an absolute honour to be a part of this heartfelt, genuine, tribute given to my idol Lata ji. Lata ji has been my ultimate inspiration." Naam Reh Jaayega: Arijit Singh, Sonu Nigam, Shaan, Kumar Sanu and Other Singers To Pay Tribute to India’s Nightingale Lata Mangeshkar.

The singer adds how she got inspired by Lata's singing style and shares: "I've idolized her in many ways ever since I was a kid I've grown up listening to her songs learning her songs I've literally studied every song sung by her like a chapter , she's been my role model she has inspired me in so many ways that I can't describe in words." Naam Reh Jaayega: Sonu Nigam, Arijit Singh, Alka Yagnik and Others To Pay Tribute to Lata Mangeshkar in Special TV Series.

Like many other singers, Palak also imbibed a lot from the late singer, she adds: "Lata ji has inspired my journey many days that I've said. When I started singing I was two and a half and I come from a Marwari family so any idea that my mom had about music was Lata ji and Lata ji's songs. Whenever we would read somewhere that Lataji had learned Urdu so my mom got me trained in Urdu."

Palak followed Lata Mangeshkar in every possible way from her singing style to eating achaar, she considered her as her biggest idol: "My mom actually got Molvi sahab to teach me Urdu. I got to know that Lata ji ate achaar so that her voice became melodious so even I started eating achaar.

"I had a big poster of Lata ji in my room. Now I have a picture of her in my temple. It's not only her songs but whatever she would do I would actually try to follow in her footsteps and she has played a huge role in my life in my singing and in my music."

The 30-year-old singer, who has given her voice in films such as 'Ek Tha Tiger' , 'Aashiqui 2', 'Kick' , 'Baaghi 2' and many more, recalls her meeting with the singing icon. "I met Lata ji when I was a kid. I remember I'd gone to meet her directly from my school. She was in Indore and I was living in Indore that time and Indore was her birthplace as well. She was happy with my charity work and asked me to continue even when I became a well-known singer. The memory is going to remain with me forever.

She talks about a few of Lata's iconic songs that she loves the most and says: "It's very difficult to choose my favorite song of Lata ji's. 'Lag ja Gale' is my most favourite song. I remember performing at Royal Albert hall London when I was 6 years old then I again performed there in 2015 both the times I sang her song. I made sure that I sing her song, because when I was growing up I was listening to this cassette called Lata Live at Royal Albert Hall. I had a memory very fresh in my heart and I wanted to give a tribute to her when I was performing at the same venue so yeah it is very special. Naam Reh Jaayega airs on Star Plus.

(The above story first appeared on LatestLY on May 08, 2022 06:33 PM IST. For more news and updates on politics, world, sports, entertainment and lifestyle, log on to our website latestly.com).