Prakash Jha’s SpiceJet Flight Gets Delayed Due to Pilot Being Stuck in Traffic, the Airline Apologises for the Delay

He posted a picture of him wearing a face shield and a mask with the airbus seats seen in the background. The filmmaker is travelling from Bombay to Patna. Spice Jet was quick enough to respond to his tweet and apologise for the delay. 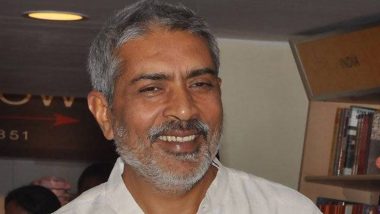 Prakash Jha has had quite a busy year. His show Aashram was a massive hit amongst the audience and the filmmaker got a lot of appreciation for pulling off such a great show with such ease. Back in October, his film Matto Ki Saikal also premiered at Busan International Film Festival and is likely to have a theatrical release in early 2021 as well. Jha is surely on a roll and is already planning many more projects for his audience to enjoy. But while that is happening, Prakash Jha got stuck on a flight for more than an hour and his reaction to it is absolutely relatable. Prakash Jha's Matto Ki Saikal to Have Its World Premiere at Busan International Film Festival 2020.

Prakash Jha took to Twitter to post a photo of himself and informed his followers that his flight got delayed for more than an hour. He revealed that the pilot of the Spice Jet aircraft got stuck in traffic and hence all the passengers including him were waiting for him on the flight. He posted a picture of him wearing a face shield and a mask with the airbus seats seen in the background. The filmmaker is travelling from Mumbai to Patna.

All dressed up and ready to go... but stuck! ⁦@flyspicejet⁩ flightSG678 Mumbai to Patna .. Been on board for more than an hour but dear Captain, stuck in traffic, I am told, is yet to arrive! This is the first one for me... Hope he comes in safe and soon!! pic.twitter.com/L54SyAEOUJ

Spice Jet was quick enough to respond to his tweet and apologise for the delay. They informed him that they will get him going very soon and minutes after their reply, Prakash Jha was finally set to go. He tweeted informing that the pilot has arrived and they will be now flying soon.

We're truly sorry for this experience, Mr. Jha. We understand delays can be difficult, especially when you're already on board and your movement is restricted. We shall get you going as soon as we can.

Earlier, Prakash Jha had met Uttar Pradesh Chief Minister Yogi Adityanath to discuss the new Film City to be built in UP. Appreciating this move, Prakash Jha had said, "It was a privilege to meet the chief minister. His views are farsighted and the atmosphere that is being created in the state towards films and entertainment is very encouraging and all of us will cooperate in that. I see all possibilities that it will not only be successful but will go a long way. I can see a very bright future in Uttar Pradesh." Prakash Jha Lauds the New National Education Policy, Says ‘It Will Ensure Equal Opportunity for Children’.

Talking about his film Matto Ki Saikal, the film narrates the story of a poor family from Mathura and a bicycle. M Gani’s story with a screenplay by Pulkit Phillip made a mark ad won a lot of appreciation at the film festival as well. Prakash Jha essays the role of Matto in the film. The romance between him and his almost 'coming apart' bicycle is a heartwarming story that was well received by the audience.

(The above story first appeared on LatestLY on Dec 14, 2020 12:29 PM IST. For more news and updates on politics, world, sports, entertainment and lifestyle, log on to our website latestly.com).