Prassthanam has an engaging premise with enough twists and turns and backed by strong performances from the main leads. But the movie is let down by its making and an over-stretched narrative 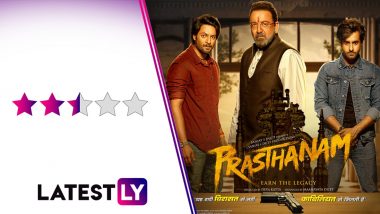 Prassthanam Movie Review: Thakur Baldev Singh (Sanjay Dutt) suffers from Sarkar syndrome. I mean, he has everything - money, power, political support and the love (and fear) of his people. He also has a loyal, and often mute, right-hand man in Badshah (Jackie Shroff). And yet he cannot manage his family properly, which leads to some very disastrous repercussions. This family turmoil, filled with some interesting twists and turns, deaths and deceits, forms the crux of Prassthanam, directed by Deva Katta who has remade his 2010 Telugu hit for Bollywood. 'What's Prassthanam?' Sonam Kapoor is Clueless About Sanjay Dutt's Next Release that Will Clash with The Zoya Factor.

The bone of contention in Baldev's family is the succession of power. Baldev's son Vivaan (Satyajeet Dubey), a brash youngster with psychopathic tendencies, wants to be the next political heir. But Baldev wants that to be his stepson Ayush (Ali Fazal). Ayush's father (Anup Sonii) was killed during a political scuffle, and Baldev married his mother (Manisha Koirala), leading to her estrangement with her daughter (Chahatt Khanna). Ayush, however, stuck with his new father and learnt the tricks of the trade pretty well.

As the tensions mount in the family, Vivaan goes and does something irreparable, that threatens to break the very fine threads holding the family together.

I have not seen the original film, but there are pretty heavy influences of Ram Gopal Varma's Sarkar in Prassthanam. From the image built around Baldev to some of the plights that he goes through, we can't help but compare the two properties. Like Sarkar, one of his sons is a waylaid moron and other is a sensible, thinking guy. Like in Sarkar, we have a scene where Baldev admonishes Vivaan for a rash act that he committed at the dining table. There is another sequence where Baldev is injured in a shootout and later, we see him waving to the crowds from the hospital. Yeah, you guessed it right... just like Sarkar.

It is when Prassthanam goes beyond the clutches of Sarkar, or for the matter, even Raajneeti, that I found the film to be really interesting. The scenes involving the dynamics between Baldev, Ayush and Vivaan are filled with enough power and gusto, enhanced by the actors' fine performances. There are some really interesting twists and turns, especially in the second half, that do keep you on the tenterhooks.

The final twist surrounding Baldev's character is something you might not expect, unless you have watched a certain Salman Khan from last year. If Prassthanam is pretty heavily influenced by Sarkar, then this Salman Khan film, especially its big twist, is clearly inspired by the Telugu original. In fact, Deva Katta also inserts a cheeky nod to this inference, when Ayush and his girlfriend Shivi (Amyra Dastur) are seen watching this Salman film in a theatre. Prassthanam: Before Sanjay Dutt’s Thriller, 9 Times When Bollywood Borrowed Both the Title and the Plot From South Movies!

While I loved the portions between the three male leads, I was put off by how stretched the movie was. There is plenty of lag in the proceedings, the climax is both melodramatic and stretched and Ayush's romantic angle is extremely pointless. I don't even remember if Shivi has any dialogues in the second half. But then, she is not the only female character that suffers from lack of any persona. Even Manisha Koirala's character pretty much disappears for most of the movie's runtime.

Another aspect that goes against Prassthanam is the making. The movie feels like it belongs to the previous decade, with various inconsistencies (Sanjay Dutt's beard varies in different scenes) and the visual tone feels dated. There are a few songs that are needlessly inserted in the film's narrative, but the background score fares better.

Prassthanam is Sanjay Dutt's home production, and the actor has chosen to play an interesting character. Baldev may present a picture of that uncle with whom you can share everything, but once the layers peel off, it shows off more grey contours. Dutt, who is quite a pro in playing such characters, leaves a good impression with his performance.

At first, I felt Ali Fazal was repeating what he did in Mirzapur and Milan Talkies. Once the drama becomes more intense, we see a side of the actor that I wish I should have checked out earlier. He is terrific in the car scene, where he breaks down for not being able to save a loved one who is about to be killed.

Prassthanam's biggest revelation is Satyajeet Dubey, though. I had only seen him in one movie before - Always Kabhi Kabhi (that also had Ali Fazal in the lead). He was very okay there. But in Prassthanam, Satyajeet stuns you with a harrowing performance that stays with you long after the movie is over. His character may feel similar to what Divyendu Sharma did in Mirzapur, but that doesn't take away anything from this young actor's dedication. The scene where he confronts his sister and her husband is very impactful.

Jackie Shroff has very minimal dialogue in the movie, letting his eyes speak more. On occasions, though, the actor goes a little overboard with his body language. Chunky Pandey is highly convincing as the slimy powerbroker. After Begum Jaan and Saaho, playing negative roles has become a forte for this actor, known once for being that playful side hero. Manisha Koirala is criminally underutilised, spending most of her time shedding tears. Amyra Dastur is wasted while Chaahatt Khanna is theatrical in her act.

- The Performances of Dutt, Fazal and Dubey

- The Dynamics Between These Characters

- Some Good Twists and Turns

- Many Portions Are Stretched

- The Female Characters Get Little To Do

- The Romantic Track and the Songs

Prassthanam has an engaging premise with enough twists and turns and backed by strong performances from the main leads. But the movie is let down by its making and an over-stretched narrative, that restricts Prassthanam to an intermittently intriguing one-time watch.

(The above story first appeared on LatestLY on Sep 20, 2019 02:46 PM IST. For more news and updates on politics, world, sports, entertainment and lifestyle, log on to our website latestly.com).