Radhe trailer is out and all his fans can talk about Salman Khan breaking his no-kiss policy. Although it isn't sure whether or not he kissed on screen for real, his fans are convinced Bhai had his first kiss with Disha Patani for Radhe. No one's complaining though! 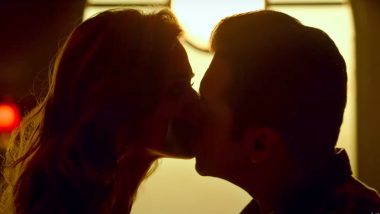 Radhe trailer is out and everyone is busy watching it on loop. Although the film just looks like a minor upgrade over Prabhu Dheva's 2009 Wanted, it is still quite explosive and might we say, 'BOLD'. We say bold because maybe, just maybe, Salman Khan has kissed his heroine on-screen perhaps for the first time. The actor has a no-kissing policy but it seems he has broken it here. The actor can be seen locking lips with Disha Patani in one of the scenes. Now we can't be too sure whether it's a real deal because it's done in the dark with just silhouettes to suggest that Bhai got his first onscreen kiss. But his fans are convinced the actor has dropped his policy to do the 'impossible' in Radhe. Radhe Trailer Out! Salman Khan and Disha Patani’s Film Feels Like Wanted Redux Only Bigger And Brasher! (Watch Video)

Salman Khan fans are quite baffled by Bhai's 'bold' approach here. Many are kidding about how the actor got his first real kiss while others are just happy he did at last.

Check out all the reactions right here...

Somebody just can't believe it

Bhai you killed it 💖.

Radhe releases on May 13 at the theatres and also on ZeePLEX for a price. The film is directed by Prabhu Dheva and also stars Randeep Hooda as the lead antagonist.

(The above story first appeared on LatestLY on Apr 22, 2021 11:35 AM IST. For more news and updates on politics, world, sports, entertainment and lifestyle, log on to our website latestly.com).