Radhika took to Instagram and posted two pictures with cute little doggies. In one of the pictures, Radhika can be seen playing with a dog as she poses with it. In the second picture, we see the actress hugging a little pup. 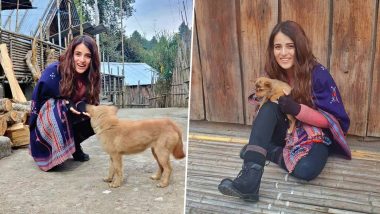 Shehnaaz Gill's dialogue from Bigg Boss 13 is going viral and how. All thanks to 'Biggini' shoot song mix fame Yash Mukhate who made a groovy song from Gill's dialogue "Sada Kutta Kutta, Tuada Kutta Tommy" and made it the talk of the town. Radhika Madan seems to be quite impressed with it too. The actress posted a picture on social media and used his dialogue as a caption for her picture. Radhika Madan Joins the Viral Binod Meme Trend and it has a Shah Rukh Khan Connection.

Radhika took to Instagram and posted two pictures with cute little doggies. In one of the pictures, Radhika can be seen playing with a dog as she poses with it. In the second picture, we see the actress hugging a little pup. Dressed in cosy winterwear, the actress looks charming as ever. While it might be really hard to take eyes off her beautiful phase, Radhika's caption which is Shehnaaz's dialogue is winning hearts right away. Madan has even tagged Yash on the post.

Radhika's picture was a hit amongst the fans. Several of her fans dropped heart emojis for her beautiful pictures. One of the fans even appreciated Shehnaaz Gill and said, "Shehnaaz Gill rocks!" The actress is currently in Ziro where she is having a fun time. Shehnaaz Gill's 'Tuada Kutta Tommy' Dialogue Gets a Quirky Musical Touch, Courtesy 'Rasode Mein Kaun Tha' Fame Yashraj Mukhate.

Earlier during an interview with IANS, Radhika opened up about her forthcoming projects and the roles she would like to take up in the coming future. "I want to do roles I haven`t done before. I don`t like to play the same character again and again. It`s very important for an actor to play different roles and takes different challenges," she said. She will be seen in Shiddat next. The film also stars Mohit Raina, Diana Penty and Sunny Kaushal in pivotal roles. The film is being helmed by Kunal Deshmukh of Jannat fame.

(The above story first appeared on LatestLY on Dec 10, 2020 09:04 PM IST. For more news and updates on politics, world, sports, entertainment and lifestyle, log on to our website latestly.com).