Yashraj Mukhate has done it again and this time he has converted a dialogue of Shehnaaz Gill from her Bigg Boss 13 house into a superb mash-up. A look at it and you will LOL. Check out 'Tauda Kutta Tommy' video here. 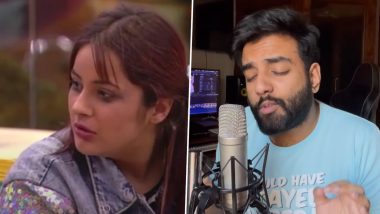 Content creator Yashraj Mukhate gave fans a rap that they'll never forget and it was 'Rasode Mein Kaun Tha' featuring the Saath Nibhaana Saathiya cast. However, its been a while we haven't heard something wow from Yashraj, and here he is churning another viral video featuring everyone's favourite Shehnaaz Gill. Yes, Mukhate has done this and converted a dialogue of Shehnaaz from her Bigg Boss 13 house days into a superb mash-up. A look at it and you will LOL. Unbelievable is the word! The video also sees Shah Rukh Khan making a guest appearance as a drummer. After Yashraj Mukhate's Kokilaben's 'Rasode me Kaun Tha' Rap Song, Another Hilarious Mashup of Rakhi Sawant's 'Charsulli Gardulli x Kachra' is Going Viral (Watch Funny Video).

The video lifted by Yashraj is from BB 13 where after an argument with her BFF Sidharth Shukla on the show Shehnaaz gets heartbroken. She says, "Kya Karu mein maar jau. Mere ko feeling nai hai. Tumhari feeling tumhari. Tuada kutta tommy, sadda kutta kutta." Incase, you didn't get it, Shehnaaz in the clip compares her feelings with a dog. Mukhate has added his magic to this dialogue and voila the result is a hilarious mash-up. Ahead the cherry on the cake is SRK from Mohabbatein with a sad expression playing dhol. ROFL!!! Help! This Musician Made a Song Out of Saath Nibhaana Saathiya 'Rasode Me Kaun Tha' Clip and We Can't Stop Playing It (Watch Video).

Wow, what a collab (sort of) between Yashraj and Shehnaaz. It is like two internet sensations together. Having said that, Mukhate never thought that his Kokilaben 'Rasode Mein Kaun Tha' rap will make him a huge star overnight. Just in case, you are bored with your mundane lifestyle, a glimpse at his Instagram/YouTube page will surely make you smile.

Coming back to this latest gem featuring BB 13's Shehnaaz Gill, what do you think? It is fun or insanely cool? Tell us your views in the comment section below. Stay tuned!

(The above story first appeared on LatestLY on Dec 08, 2020 09:22 PM IST. For more news and updates on politics, world, sports, entertainment and lifestyle, log on to our website latestly.com).