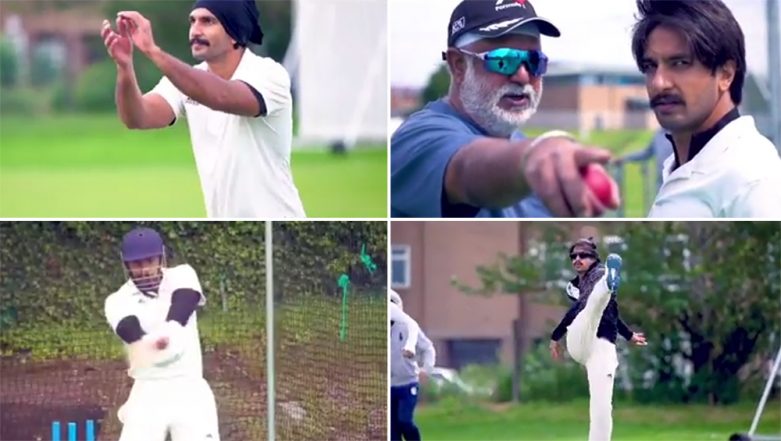 It was on this day, 36 years ago, when India lifted the historic Cricket World Cup for the very first time. They were the underdogs of that era and beating West Indies was not everyone's cup of tea. Yet India was able to achieve this big feat under the able leadership of Kapil Dev and their victory deserves all the appreciation. As Ranveer gears up to step into Kapil Dev's shoes for Kabir Khan's '83, he decided to celebrate the win's 36th anniversary in his own unique way. Ranveer Singh in PMOA During India vs Pakistan Match: ICC Issues Statement Regarding Bollywood Actor's Presence.

Ranveer shared a BTS video of his prepping session with his reel life team as they get ready to start shooting for India's World Cup victory in reel life. Kabir Khan's directorial revolves around the same innings when India was able to clinch the iconic World Cup and going by its premises, we can vouch for it to be a blockbuster already. The team is working really hard to adapt the styles of these veteran cricketers including Kapil Dev's very famous Natarajan shot. CWC 2019: From Saurav Ganguly to Hardik Pandya, Ranveer Singh Shares Pictures with Star Cricketers Like a True Fanboy.

Recently the team of '83 welcomed its new member in Deepika Padukone. The actress will play Romi Dev to Ranveer Singh's Kapil Dev. This will be their fourth collaboration after Ram Leela, Bajirao Mastani and Padmaavat. Earlier the actor played her husband in Finding Fanny and guess DP is just returning the favour.