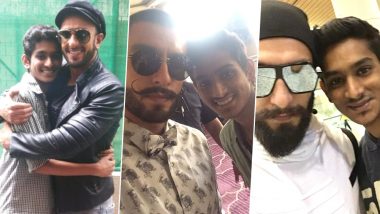 Just while we were struggling with the sudden demise of veteran actor Girish Karnad, Ranveer Singh was trying hard to cope up with his recent loss. An actor shares a great rapport with his fan and RS was no different. A Mumbai resident, Jatin Dulera, was a die-hard Ranveer fan and he was lucky enough to meet his idol on multiple occasions. However, Dulera aka Lil Homie passed away last morning and Ranveer was shocked to hear about his sudden demise. Confirmed! Deepika Padukone will Play Ranveer Singh's Wife in Kabir Khan's '83.

In a post shared by photographer Viral Bhayani, he informed us about how Jatin Dulera collapsed at his residence while he was getting ready to go to his office. The reason behind his ill health is not known and the funeral was held at Shivaji Park, Mumbai. If Bhayani is to believe, around 700 friends had turned up to pay their last respects. And Ranveer too offered his condolences via an Instagram story. 83 Actor Ranveer Singh Mingles with Sir Vivian Richards After Bonding With Sunil Gavaskar and Shane Warne - View Pic.

The actor took to his social media account to share a collage of their pictures together and it was a heartwarming gesture. Even though he is busy shooting for Kabir Khan's next '83 in London these days, he was able to react to this incident and that's commendable on his part.

(The above story first appeared on LatestLY on Jun 11, 2019 08:42 AM IST. For more news and updates on politics, world, sports, entertainment and lifestyle, log on to our website latestly.com).