Ratsasan, Ram Setu, Sooryavanshi and More - 9 Upcoming Movies Of Akshay Kumar You Should Know About!

During the lockdown, Akshay Kumar couldn't shoot movies, so he did the next best thing. He signed movies and kept making announcements. Till the last count, the actor has nine upcoming movies at various stages of production. We have listed them all down here. 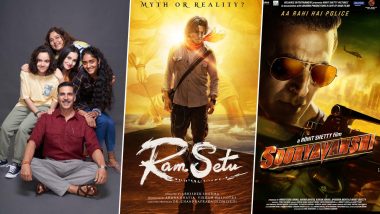 Akshay Kumar has a lot of films on his platter. He is often called the ATM of Bollywood because even when his movies weren't earning Rs 100 crore, they were covering the production costs and were also earning profits. He kept the industry floating even when movies of other biggies bit the dust. That's why he is the darling of the producers. One other aspect of why he is the favourite of the producers and the box office is that Akshay doesn't believe in shooting a movie for months. Most of the time they are start-to-finish schedules and he wraps them up quickly. This way producers also get to save their money on unnecessary dates. For a year, Akshay like everybody else stayed at home, he did just one thing - sign movies. Today, the actor has 9 upcoming movies in various stages of production. Bollywood Actor Akshay Kumar Announces Beta Release of FAU-G’s Team Death Match Mode

Sooryavanshi, the fourth installment from Rohit Shetty's Cop Universe, is sealed and packed to be delivered at the theatres. But COVID-19 played spoiled sport. In all likelihood, this will be the first film of Akshay which would release at the theatres once things get back to normalcy.

This is yet another movie like Sooryavanshi which kept pushing its release date because of the pandemic. Akshay travels to yesteryear in this film which is in the post-production stage.

Although we aren't sure about the length of Akshay's role in the film, this is one Aanand L Rai film we are really looking forward to. Especially because Dhanush returns to Rai's camp after Ranjhaanaa. Sara Ali Khan also plays a key role in the film.

Prithviraj was supposed to be Akshay's Diwali release after many years in 2020. But the pandemic ruined the plans. The shoot of the film is yet to begin.

This is yet another movie that the actor was shooting before everything went shut due to COVID-19. This is the official remake of Ajith's Veeram and stars Kriti Sanon.

Akshay plays a professor in this movie which he announced last year. He even revealed his look for the film. Before things went back to closure due to the second wave, Akshay was shooting this movie with Jacqueline Fernandez and Nushrat Bharuccha.

A story about a brother and his sisters, the film is yet another Aanand L Rai-Akshay collab after Atrangi Re. It is said that the actor has started shooting this film.

Although there's no official confirmation that it is happening, Akshay did hint about it in an Instagram post with the cast of Housefull 4.

Today, a report did the rounds of the internet that Akshay Kumar could be part of the Hindi remake of Ratsasan. The Tamil film starrer Vishnu Vishal and Amala Paul and released in 2018.

(The above story first appeared on LatestLY on Jun 29, 2021 03:32 PM IST. For more news and updates on politics, world, sports, entertainment and lifestyle, log on to our website latestly.com).