SSR's girlfriend at the time of his death, actress Rhea Chakraborty, put forth her side of the story in an interview. The actress addressed all the allegations placed on her. 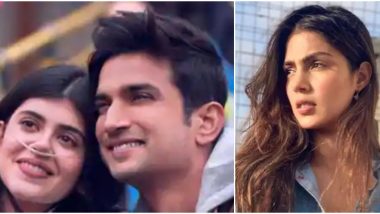 Actor Sushant Singh Rajput's death investigation has become a huge mystery given how new allegations keep on coming out with each passing day. The actor, died by suicide on June 14 and with the CBI taking over the case, SSR's girlfriend at the time of his death, actress Rhea Chakraborty, put forth her side of the story in an interview with India Today. The actress addressed all the allegations placed on her. Sushant Singh Rajput Death Probe: CBI Summons Rhea Chakraborty’s Brother Showik.

Rhea in her interview, also revealed how the #MeToo allegations on Sushant affected his mental sanity. Rhea revealed, "I will tell you something. Sanjana Sanghi had alleged that Sushant Singh Rajput harassed her, and those #MeToo allegations haunted him. Sanjana hadn't given any clarification, she finally came out 1.5 months later, but that destroyed Sushant's mental sanity. Till then, Sushant had to come out and reveal their chats himself." Ankita Lokhande Slams Rhea Chakraborty's Claim That Sushant Singh Rajput Was Claustrophobic With a Flight Simulation Video.

Further talking about how these allegations impacted Sushant in more ways than one, Rhea revealed in the interview, "Kedarnath to Sonchiriya, his films were very good but he wasn't given his due. He wasn't nominated for awards either. It was because of the fake allegations. He also felt that even if he did another hit film, it wouldn't matter, he won't get his due because this wouldn't leave him." Sanjana Sanghi Clarifies Rumours Around Leveling #MeToo Allegations Against Sushant Singh Rajput.

She continued, "He would often say he will leave everything. These fake articles, the fake MeToo allegation, all worked systematically to ruin his career. Like what is happening to me, like how I am being targetted. I understand what he was going through better today."

Given how a lot of conspiracy theories have shrouded Sushant's suicide when Rhea was asked if she thought SSR had any enemies, Rhea point-blank pointed her fingers at his Dil Bechara co-star Sanjana Sanghi and his publicist Rohini Iyer.

"Sanjana Sanghi and Rohini Iyer ne unhe bada sataya hai. Rohini ne humein milaya tha but later she stopped talking to us. Sanjana and Rohini, Sushant though was a nexus. It was odd that if I am doing a film, a big film, why would you take so much time to clarify the MeToo allegations?" revealed Rhea, opening a completely new can of worms. We wonder what Sanjana and Rohini will have to say in this matter now.

(The above story first appeared on LatestLY on Aug 27, 2020 10:15 PM IST. For more news and updates on politics, world, sports, entertainment and lifestyle, log on to our website latestly.com).