Looks like Bollywood is never going to listen to any of us and continue remaking old iconic songs. Yep, you guessed it right... another remake of a popular Hindi song is on cards. 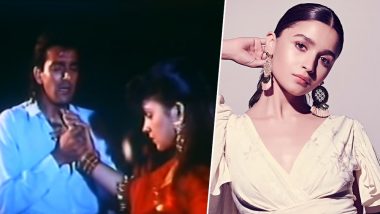 Looks like Bollywood is never going to listen to any of us and continue remaking old iconic songs. Yep, you guessed it right... another remake of a popular Hindi song is on cards. We are referring to Tumhe Apna Banane Ki Kasam from Sadak which was originally picturised on Pooja Bhatt and Sanjay Dutt. According to reports online, Mahesh Bhatt is all set to rehash the song for Sadak 2 which has Alia Bhatt and Aditya Roy Kapur in the lead. However, it is unclear whether they will star in the song along with Pooja and Sajay or not. Yes, Pooja Bhatt and Sanjay Dutt, the original leads, also star in the film, along with Alia and Aditya. Now if you remember, Hate Story 3 had also acquired the rights of the popular Bollywood number and came up with their own version of Tumhe Apna Banane Ki Kasam. RRR: Alia Bhatt Refuses to Star in Baahubali Director SS Rajamouli's Next?

Anyway, there is no news about when Alia and Aditya will start shooting for the film but the announcement of the project was done a few months back. Ever since then fans have been waiting to get an update about the much- awaited film. As for now, Alia is going to get super busy with the promotions of Brahmastra and Takht, both big- budget movies releasing this year. Kalank New Poster: Alia Bhatt As The Resilient Yet Demure Roop Is Draped In A Bridal Ensemble With An Intriguing Backstory Waiting To Be Told.

Watch the original version of the song here:

Coming back to Sadak 2, Mahesh Bhatt returns to directing films after a hiatus of 19 long years. The original film was the story of a taxi driver (Sanjay) trying to rescue the woman he loves (Pooja) from a brothel. It also featured Sadashiv Amrapurkar as Maharani, brothel’s owner and Soni Razdan. Sadak 2 is slated to release on March 25, 2020.

(The above story first appeared on LatestLY on Mar 10, 2019 04:56 PM IST. For more news and updates on politics, world, sports, entertainment and lifestyle, log on to our website latestly.com).