Salman Khan's Radhe to Release on Eid 2020? Fans Believe So - Check out Tweets

Superstar Salman Khan has made a new film announcement, and fans cannot hide their excitement on social media. The superstar's upcoming film is Radhe, and it is reportedly set to hit the screens on Eid 2020. 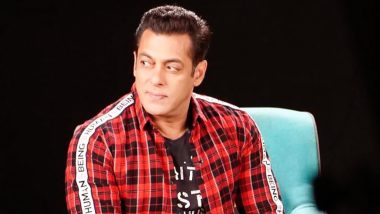 Superstar Salman Khan has made a new film announcement, and fans cannot hide their excitement on social media. The superstar's upcoming film is Radhe, and it is reportedly set to hit the screens on Eid 2020. Although no confirmation has come about as to when the film is scheduled to release, fans have already started speculating this is Salman's Eid 2020 release. Salman Khan Threatened on a Student Union’s Facebook Page, Police Launches Investigation.

In fact, a user declared: "Confirmed and this party moment for all Bhai's fans. Salman Khan IN and AS #Radhey coming #Eid2020." Another tweeted: "Expect Official Announcement Soon - @BeingSalmanKhan as #Radhey - @PDdancing Directorial - #Eid2020 Release!" A social media user commented that he is excited for "#radhey on eid from first name its looking more positive than #inshallah or #Dabangg3." Bigg Boss 13: Salman Khan Prefers Lonavala over Mumbai’s Goregaon Film City Sets, Here’s Why!

Would Call This a Creative Fan-Made Poster

He Is Coming To Stroms The Box Office In This Eid... 🔥

Eid is incomplete in bollywood without him and his movie I'm a srkian but eid belongs to him #radhe-radhe https://t.co/CmDqXlBsdI

The Love for Salman's character Radhe

According to a Bollywood Hungama sources, Radhe is indeed Salman Khan's next release after Dabangg 3, which opens on December 20 this year, and it'll release on Eid 2020. The sources added that "Radhe" will be directed by Prabhudheva, who is also helming Dabangg 3. The source added that "Radhe" is an official adaptation of a Korean film.

(The above story first appeared on LatestLY on Sep 25, 2019 05:29 PM IST. For more news and updates on politics, world, sports, entertainment and lifestyle, log on to our website latestly.com).