That said, there is no denying that the action sequences of Sanak, as shown in the trailer, promises to be a treat for all Vidyut Jammwal fans. Sanak is streaming on Disney+ Hotstar from October 15. 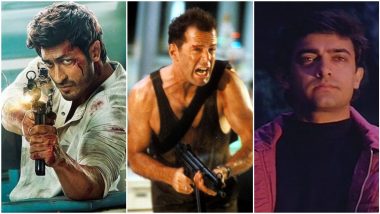 The trailer of Sanak dropped early today, and it gave us major Die Hard vibes. Directed by Kanishk Varma, Sanak stars Vidyut Jammwal in the lead, with Rukmini Maitra, Neha Dhupia, Chandan Roy and Chandan Roy Sanyal in the supporting cast. Going by the trailer, it is about a man who turns an one-man-army to rescue his wife trapped in a hospital that is taken over by terrorists. Doesn't that ring a bell for you? Sanak Trailer: Vidyut Jammwal Going 'Die Hard' in a Hospital Will Make Your Jaws Drop!

The first Die Hard film, directed by John McTiernan, is a cult classic action thriller movie that came out in 1988 and turned Bruce Willis, formerly known for his light-hearted roles, into an action superstar. The premise is about a bunch of German terrorists, led by Hans Gruber (played by the late Alan Rickman in his breakout role), who take over a skyscraper trapping the employees of a financial institution as hostages. Willis plays John McClane, a cop, whose wife is one of the hostages, and who, although inside the building, hasn't come under the terrorists' radar. With some action chops and ingenuity, he manages to turn saviour and also end up killing all the terrorists, including Gruber.

Watch the Trailer of Sanak:

Now in Sanak, while the setting has changed from a skyscraper to a hospital, most of the beats remain the same, including the hero and the villain's taunting conversations through walkie-talkies. So much for originality here!

Watch a scene from Die Hard below:

Now the Die Hard formula is something even Hollywood has recycled many times in other movies like Under Siege, Air Force One, White House Down, among others. Closer to Bollywood, Die Hard has also inspired an Aamir Khan movie in the '90s. Remember that?

Baazi, the 1995 film, which was directed by Ashutosh Gowariker, years before he achieved global fame through Lagaan. Starring Aamir Khan as a cop, though nowhere in the league as the one he essayed in Sarfarosh, Baazi was a flop at the box office, but it is most remembered featuring the superstar in the drag in some of the sequences, including a song.

Co-starring Mamta Kulkarni, Baazi is a usual masala thriller Bollywood, save for the third act that suddenly enters Die Hard territory, with the villains taking over a building as hostage, and the hero turning desi John McClane here. Sadly, for Aamir Khan, that didn't turn him into a bonafide action star, though everything worked out for the good for him and his fans. That said, Baazi is far less terrible than Aamir's attempt to turn Michael Corleone in Aatank Hi Aatank.

That said, there is no denying that the action sequences of Sanak, as shown in the trailer, promises to be a treat for all Vidyut Jammwal fans. Sanak is streaming on Disney+ Hotstar from October 15.

(The above story first appeared on LatestLY on Oct 05, 2021 03:41 PM IST. For more news and updates on politics, world, sports, entertainment and lifestyle, log on to our website latestly.com).