Sidharth Malhotra’s Marjaavaan to Not Clash with Hrithik Roshan-Tiger Shroff’s WAR, Film to Release on November 22

Sidharth Malhotra’s film was scheduled to release on October 2. There are two other big budgeted films on the same day – WAR and Sye Raa Narasimha Reddy. Nikhil Advani, producer of Marjaavaan, has confirmed that the film has been pushed. 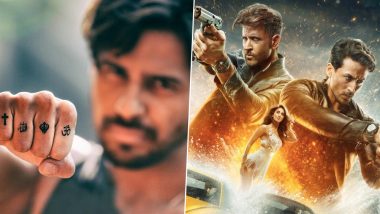 Milap Zaveri directorial Marjaavaan starring Sidharth Malhotra and Riteish Deshmukh is touted as an action thriller. The film’s co-producer Bhushan Kumar describes it as ‘a violent, dramatic love story’. This is the second time that Sidharth and Riteish have collaborated for a project after Ek Villain. Fans who were eagerly waiting to watch this upcoming flick, will have to wait for some more time. Marjaavaan is now not clashing with Hrithik Roshan and Tiger Shroff starrer, WAR. The film has been postponed to November 22.

Sidharth Malhotra’s film was scheduled to release on October 2. There are two other big budgeted films on the same day – WAR and Sye Raa Narasimha Reddy. The news has been confirmed by the film’s Nikhil Advani. He revealed to Mirror the reason behind Marjaavaan been delayed, “It is important that we give Marjaavaan a suitable release. We’re proud of Milap’s inimitable filmmaking style and unique language that we expect will exceed audience expectations.” Co-producer Bhushan further added, “The film needs this kind of VFX especially with Riteish playing a dwarf.”

Talking about Riteish Deshmukh’s role in the film director Milap Zaveri told the tabloid, “We decided to make his villain a three-foot-tall but larger-than-life midget with a wicked sense of humour. His Vishnu is arrogant and thinks he is invincible.” Marjaavaan also stars Tara Sutaria and Rakul Preet Singh as the lead actresses. The film is produced under the banners of T-Series and Emmay Entertainment.

(The above story first appeared on LatestLY on Aug 23, 2019 09:21 AM IST. For more news and updates on politics, world, sports, entertainment and lifestyle, log on to our website latestly.com).