Sonakshi Sinha Is All Dressed Up But Has Nowhere to Go, Actress Urges Everyone to Stay Home During COVID-19 Lockdown

Bollywood actor Sonakshi Sinha on Saturday treated her fans to a glammed-up photo of her and urged everyone to stay at home amid the raging second wave of COVID-19. 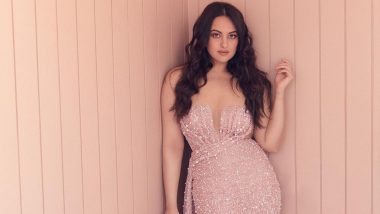 Bollywood actor Sonakshi Sinha on Saturday treated her fans to a glammed-up photo of her and urged everyone to stay at home amid the raging second wave of COVID-19. The 'Rowdy Rathore' actor took to her Instagram handle and shared a photo of her dressed in a sparkling blush pink dress. She captioned it as, "All dressed up and nowhere to go. #gharperaho." Sonakshi Sinha: My Biggest Critic Has to Be My Mom and She Has Always Been Bang-On.

The post from the 33-year-old actor garnered more than 71 thousand likes within nearly an hour of it being shared on the photo-sharing application.

The second wave of coronavirus has infected a lot of people and the number of COVID-19 positive cases has been rapidly rising. In Bollywood, an array of celebrities have got infected within a span of a few weeks. Fallen: Sonakshi Sinha Wraps Up Shoot of Reema Kagti’s Mini-Series (View Post).

Recently, Vicky Kaushal, Akshay Kumar, Govinda, Paresh Rawal, Alia Bhatt, Ranbir Kapoor, and Rohit Saraf, among others had tested positive for COVID-19. Earlier, actors Amitabh Bachchan, Abhishek Bachchan, Arjun Kapoor, Malaika Arora, and some others were infected with the virus. In March 2020, Bollywood singer Kanika Kapoor, who rose to fame with her song 'Baby Doll', became the first Bollywood celebrity to get infected with COVID-19.