Shweta Singh Kirti, sister of Sushant Singh Rajput, has applauded the Narcotics Control Bureau (NCB) for its action in the ongoing probe, raiding a number of locations including the residence of Showik Chakraborty. 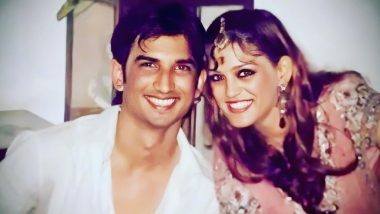 Shweta Singh Kirti, sister of Sushant Singh Rajput, has applauded the Narcotics Control Bureau (NCB) for its action in the ongoing probe, raiding a number of locations including the residence of Showik Chakraborty. Showik along with his sister, the late Sushant's girlfriend Rhea Chakraborty and their parents, have been accused of abetment to the actor's suicide, among other charges, in an FIR filed earlier by Sushant's family. The NCB is investigating Sushant's death along with the CBI and enforcement Directorate (ED). Sushant Singh Rajput Case: Samuel Miranda, Showik Chakraborty Served With Summons to Join the Investigation After NCB Conducts Raids At Their Residence

"Good going NCB... Thank You God. #GreatStartNCB," Shweta wrote on her Twitter handle. On Friday, the NCB carried out raids at a number of locations here, including at the homes of Showik Chakraborty and the late actor's house manager Samuel Miranda. The NCB also took Showik and Miranda for questioning at its office after conducting searches for two hours. NCB Deputy Director KPS Malhotra told the media that the homes of Showik were being searched, but declined to elaborate. Sushant Singh Rajput Case: NCB Raids Rhea Chakraborty, Samuel Miranda’s Residences Over Drug Angle

On June 14, Sushant was found dead in his home in Mumbai. At that time, Mumbai Police had concluded it was a case of suicide, and investigated reasons that might have caused Sushant to end his life. Many conflicting theories have emerged since then, adding to the mystery. Sushant's girlfriend Rhea Chakraborty and her family has been accused by the late actor's father KK Singh of abetting his son's suicide, among other charges. Now, there is a drug angle to it.

(The above story first appeared on LatestLY on Sep 04, 2020 02:00 PM IST. For more news and updates on politics, world, sports, entertainment and lifestyle, log on to our website latestly.com).