Sushant Singh Rajput Fans Trend #DilBecharaTrailer Ahead Of Its Release, Root for It to Beat Zero and Become 'Most-Watched' Trailer 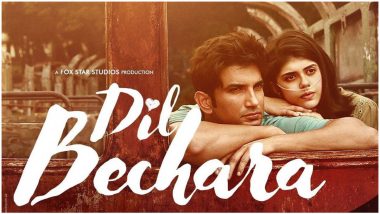 Sushant Singh Rajput's last film, Dil Bechara's trailer is all set to release on July 6 and fans have been trending it on social media since over 24 hours before. The actor's sudden death left his fans and family deeply saddened. Known for his unmatched acting talents, Sushant is certainly going to be dearly missed by his fans and hence they want to cherish and honour his final work. If you happen to head over to Twitter at the moment, you'll see #DilBechara trending on Twitter. While earlier fans hoped for the film to get a theatrical release, given the coronavirus complications, the film is going for a direct OTT release on Disney+ Hotstar. Sushant Singh Rajput's Movie Dil Bechara's Trailer To Release on 6 July, Lead Actress Sanjana Sanghi Shares Announcement Poster.

Fans of the actor have been tweeting asking fan clubs of other big stars such as Akshay Kumar to come in support of SSR's film and make it the most-watched trailer. Sushant's fans have been trending the trailer hashtag with tweets asking netizens to create a record for the trailer's views. Dil Bechara stars Sushant along sidde debutante Sanjana Sanghi. The film is a directorial debut of casting agent Mukesh Chhabra and is based on John Green's novel, The Fault In Our Stars.

A few tweets have also suggested to break the record set by Shah Rukh Khan's Zero trailer which has over 121 million views on YouTube. As for the record for the most number of views in the first 24 hours, Akshay Kumar's Sooryvanshi recently clocked over 41 million views. Check out tweets from the #DilBechara trend here. Dil Bechara: Sanjana Sanghi Has a Special Audio Note For Fans Who Wanted a Theatrical Release of Sushant Singh Rajput's Last Film.

Let's Make It a Record-Breaking Trailer:

we need to make Dil bechara trailer to cross this record !!!

Cmon World. We need to give tribute to our beloved actor @itsSSR

Please makes it most views trailer in 24 hours

And show our power's pic.twitter.com/9IXACWdujt

Blockbuster Trailer in History of Bollywood!

Today Is The Day #SushantSinghRajput's Last Movie's Trailer Is Going To Out.

Can We Make It The Most Blockbuster Trailer In The History Of Bollywood !!!

Sushant Singh Rajput's last film, Dil Bechara is all set to release on Disney+ Hotstar on July 24. The trailer of the film is expected to release anytime soon. Stay tuned!

(The above story first appeared on LatestLY on Jul 06, 2020 10:16 AM IST. For more news and updates on politics, world, sports, entertainment and lifestyle, log on to our website latestly.com).