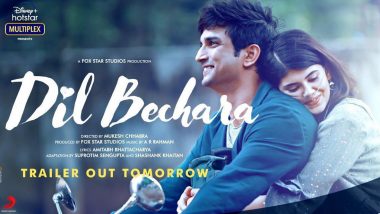 Late star Sushant Singh Rajput and debutante Sanjana Sanghi's Dil Bechara is all set to release this month. After the tragic demise of Sushant, the fans have been demanding to watch this movie on the big screen as an ode to him. However, due to pandemic circumstances, the makers decided to make it available for the fans on Disney+ Hotstar for free. Finally, they have also announced the trailer date of the same. Dil Bechara trailer releases on 6 July 2020, that is tomorrow! Dil Bechara: Sanjana Sanghi Has a Special Audio Note For Fans Who Wanted a Theatrical Release of Sushant Singh Rajput's Last Film.

Announcing about the same, lead actress Sanjana wrote on Instagram, "Kizie is entirely incomplete without Manny. This is one of my favourite shots, so surreal and dreamlike The #DilBechara trailer will be out tomorrow. You all? Just stay tuned. #SushantSinghRajput." Check out the announcement poster below.

Dil Bechara is based on John Green's 2012 novel The Fault in Our Stars. Earlier, Shailene Woodley and Ansel Elgort starred in the Hollywood film that is adapted from the same book. The Bollywood film is directed by Mukesh Chhabra and also stars Saif Ali Khan, Milind Gunaji and Javed Jaffrey in the supporting roles. The movie can be watched by the subscribers as well as the non-subscribers on Disney+ Hotstar app on 24 July 2020. So, gear yourself up for an emotional ride! How eager are you?

(The above story first appeared on LatestLY on Jul 05, 2020 03:00 PM IST. For more news and updates on politics, world, sports, entertainment and lifestyle, log on to our website latestly.com).