A group of Sushant's fans started protesting on the streets of Patna against Maharashtra government's decision to not allow CBI enquiry in his death case. 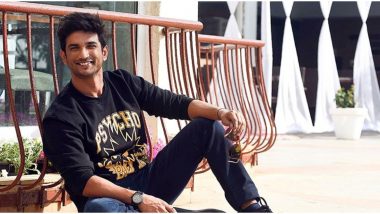 Sushant Singh Rajput's death probe is getting murkier by day. The case recently got twisted after the late actor's father filed an FIR with Patna Police against Rhea Chakraborty. He alleged her of conspiracy and abetment to suicide. While Rhea soon released an emotional video saying how she trusts the Indian judiciary, Sushant's family members along with their lawyers are demanding for CBI probe instead. The same request which has been rejected by Maharashtra Home Minister, Anil Deshmukh time and again. Sushant Singh Rajput’s Sister Shweta Pens An Open Letter to PM Narendra Modi, Requests Him to Make Sure No Evidence Are Tampered With in the Case.

However, the continuous rejection has irked his fans so much so that they have started protesting against Mumbai police and Maharashtra state government. A group of Sushant's fans started protesting on the streets of Patna against Maharashtra government's decision to not allow CBI enquiry in his death case. They are also accusing Uddhav Thackeray of being a hindrance and blocking the probe into this matter.

Check Out their Protest Video

#Breaking | Fans of Sushant Singh Rajput are protesting in Patna against the Maharashtra government for blocking the CBI probe.

The fans are demanding a CBI investigation in the case.

It was only yesterday when Maharashtra CM Uddhav Thackeray requested Sushant's fans to trust the Mumbai police and realise that they're competent enough. He further refuted the possibility of calling CBI over since it would demotivate his police officers who have been relentlessly working as COVID-19 warriors. Meanwhile, the Bihar police is working in tandem with the state police and they recently questioned and recorded Ankita Lokhande's statement for their investigation.

(The above story first appeared on LatestLY on Aug 01, 2020 05:15 PM IST. For more news and updates on politics, world, sports, entertainment and lifestyle, log on to our website latestly.com).