Sushmita Sen's Brother Rajeev All Set for His Bollywood Debut in Iti: Can You Solve Your Own Murder? 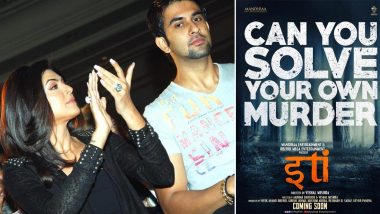 Sushmita Sen With Brother Rajeev, Can You Solve Your Own Murder? Poster (Photo Credits: Twitter)

Sushmita Sens brother Rajeev Sen will make his Bollywood debut with "Iti: Can You Solve Your Own Murder?" He says he always had a hidden desire to express his creative side. "Movies, acting, performing are a massive part of my life. To get such a brilliantly written role in a concept-driven and unique thriller for my debut movie, is an honour," said Rajeev. He said that he has been an introvert. Iti: Vivek Oberoi Announces His Production Venture With An Intriguing Poster!

"Gradually, I opened up but I had this hidden desire to express my creative side and bring alive characters. I contemplated for a long time but my near and dear ones discovered my passion for acting. They pushed me to take this up and explore the journey into the film industry," he shared. On how his sister Sushmita has inspired him, Rajeev said: "My sister, the most beautiful person, Sushmita Sen, also inspires me largely. Urvashi Rautela Grateful to Represent India in Her International Debut Film ‘Aislados’

A self-made woman who made the country proud and is a global Icon. I am so proud to be her brother and fortunate to have her support." He said he wanted to act in movies, but on his own merit. "Here I am, announcing my debut film with this fantastic team and I am super excited," he said. The film is written and directed by Vishal Mishra.

(The above story first appeared on LatestLY on Jun 30, 2020 05:57 PM IST. For more news and updates on politics, world, sports, entertainment and lifestyle, log on to our website latestly.com).