The film is said to have an underlying theme of women empowerment as well which will be shown through Renee's character. She dwells into the role quite perfectly in the teaser and it will be fun to see what the film has to offer. 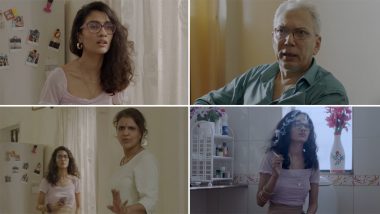 While Sushmita Sen has always mesmerised us with her acting skills and beauty, her daughter Renee is all set to woo the audience with her debut film. Titled Suttabaazi, the film introduces you into the world of a crazy family and how they co-exist in each other's world. The makers of the film dropped the trailer of the film today and we must say you will definitely relate to it. Sushmita Sen's Daughter Renee Makes her Acting Debut, Starts Shooting for Suttabaazi - Read Details.

The trailer begins with the introduction of Renee's character who is quite rebellious.  She is stuck at home during the lockdown with her parents and is trying to cope up with her mother's nagging and her father's goofy behaviour. Rahul Vohra and Komal Chhabria step in the shoes of Renee aka Diya Kumar's parents and from the look of it, seem to be doing a great job.

The film is said to have an underlying theme of women empowerment as well which will be shown through Renee's character.  She dwells into the role quite perfectly in the teaser and it will be fun to see what the film has to offer. Sushmita Sen Celebrating Diwali With Her Daughters and Her Boyfriend Rohman Shawl Will Bring an Instant Smile to Your Face.

Suttabaazi also marks the feature film debut of director Kabeer Khurana. The film is supposedly taking the digital route and release online on an OTT platform.

Earlier, In September, on the occasion of Renee’s birthday, mommy Sushmita Sen wished her with a heartfelt birthday note. The actress took to her Instagram and wrote, “Happyyyy Birthday my first love!!! WE ARE 21! What a journey this has been shona...one that has definitely brought me closer to God!!!"

She continued by saying, "I pray you to find the courage to be the most authentic version of yourself & always be relentless in the pursuit of your happiness...May all your dreams manifest with hard work & undying passion!! Come on big girl...the world awaits!!! I love you infinity Renee!!#duggadugga Maa, Alisah @rohmanshawl P.S. Renee’s photoshoot by Maa!!”

(The above story first appeared on LatestLY on Nov 19, 2020 02:44 PM IST. For more news and updates on politics, world, sports, entertainment and lifestyle, log on to our website latestly.com).