The wait is finally over as Priyanka Chopra Jonas, Rajkummar Rao and Adarsh Gourav's Netflix film The White Tiger starts streaming on the OTT platform from today (January 22). And as per the early reviews, the movie is hit among the critics. Read on. 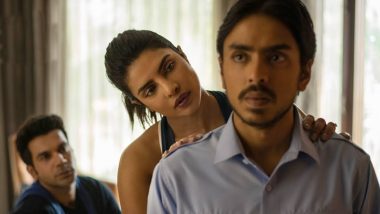 The wait is finally over as Priyanka Chopra Jonas, Rajkummar Rao and Adarsh Gourav's Netflix film The White Tiger starts streaming on the OTT platform from today (January 22). Right from the teaser to the trailer, fans, as well as the critics, have been waiting with bated breath for this one. The film is based on Aravind Adiga’s book of the same name and well as per early reviews, TWT is getting all the love. Helmed by Ramin Bahrani, it tells rags-to-riches story of a man along with revealing the truth about India. The White Tiger Trailer: Priyanka Chopra Jonas and Rajkummar Rao's Film Explores the Parasitic Class Divide (Watch Video).

Just in case, you are planning to binge in this drama and are confused about should you watch it or not? Fret not, as we've got you covered. We've compiled some of the best reviews for you to help you make a decision about The White Tiger. FYI, fans, as well as the critics, are going gaga over Adarsh Gourav's brilliant acting. Check it out. The White Tiger: Priyanka Chopra Wears a Mask and Tells What It Is Like to Shoot For the Netflix Film in Delhi’s Pollution (View Pic).

"Bahrani (Man Push Cart, Chop Shop, Goodbye Solo), a filmmaker reputed for his underdog tales, pumps all he's got into The White Tiger. The film is, however, a mixed bag. The storytelling is incisive and kinetic. Lead actor Adarsh Gourav is absolutely brilliant. Priyanka Chopra Jonas, in a supporting role, doesn't put a foot wrong," writes NDTV.

The New York Times says 'Don't call him a slumdog' and pens, "The plot is lively, and the settings vividly captured by Bahrani and the director of photography, Paolo Carnera, but the characters don’t quite come to life. They aren’t trapped by prescribed social roles so much as by the programmatic design of the narrative, which insists it is showing things as they really are. If it wasn’t so insistent, it might be more convincing."

"Fuelled by a punchy hip-hop soundtrack and a frenetic energy, The White Tiger is a creepy chronicle of a newly globalised nation struggling, like Balram, with an inbuilt inferiority complex. We keep telling ourselves that we're tigers, but really, we're just tigers that’re chasing their own tails," mentions Hindustan Times.

"Cinematographer Paolo Carnera gives the nighttime glow of street lights an intoxicating, alluring feel; Balram is often captured with a fisheye lens, so it looks as if the camera is trying to crawl into his brain. Gourav’s performance fills in the spaces between his words. There’s a malleability to his expressions, in how easily they can race between naivety and lordliness. A sheepish smile turns into a shark’s grin – and the transformation from prey to predator is complete," adds Independent.

Deadline feels, "Bahrani weaves the story from the outside in, using authentic locations and local actors who hit the perfect notes for this darkish commentary on India’s caste system. By letting Balram tell his own story in exceptionally well-written narration, the film actually feels — intentionally — closer in style to Scorsese’s Goodfellas than any modern Bollywood production."

Well, going by the above reviews, we feel that The White Tiger is a must-watch for peeps who love dark films that bring light to scathing reality. So, are you gonna watch the flick? Tell us in the comment section below. Stay tuned!

(The above story first appeared on LatestLY on Jan 22, 2021 04:28 PM IST. For more news and updates on politics, world, sports, entertainment and lifestyle, log on to our website latestly.com).