Can you spot the eternal bachelor of Bollywood in this major #throwbackpicture? 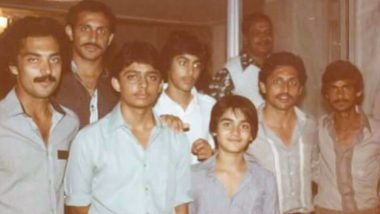 While Bollywood and Cricket go hand-in-hand, back in the day it seems Salman Khan and his brother Arbaaz Khan were big hockey fans. No wonder, the two Khan brothers look starstruck in this throwback picture from the 80s wherein they are seen posing with the Pakistan Hockey captain and his team. The little kid standing in the front with a wide smile is Arbaaz and it’s quite easy to spot him. But what’s surprising is that Salman is absolutely unrecognisable in the picture. Guess the Being Human superstar wasn’t always this good-looking and going by the picture it’s obvious that he worked really hard on himself before making his entry in Bollywood as a hero. Salman Khan Birthday: Here's How The Actor Plans to Make This Day Extra Special for his Fans.

In fact, the Sultan actor looks so different that if Arbaaz wouldn’t have mentioned his name in his Instagram caption then none of us would have realised that even he is present in the picture. Yes, the innocent looking guy, sporting a sort of pencil moustache standing just behind Arbaaz is none other than Bhai himself.

Arbaaz shared this vintage picture back in 2016 on his Instagram account and wrote, 'With the Pakistan hockey captain and team in the mid-80s. Don't miss Chulbul Pandey behind me...Nostalgia.' Salman Khan will get married in 2019 reveals Karan Johar.

Doesn't Salman Look Like Every Other Awkward Teenager In The Throwback Picture?

With the Pakistan hockey captain and team in the mid 80s.. Don't miss Chulbul Pandey behind me 😂 Nostalgia 😊

Anyway, coming back to Salman, the actor celebrates his 53rd birthday today and as usual, Khan will spend his special day along with his family and close friends. Like last year, Salman is expected to zoom off to his Panvel farmhouse for the celebrations. On the work front, he is currently busy shooting for Ali Abbas Zafar's much-awaited film Bharat. Co-starring Katrina Kaif, Disha Patani, and Tabu, the big budget film will release in June next year.

(The above story first appeared on LatestLY on Dec 27, 2018 02:13 PM IST. For more news and updates on politics, world, sports, entertainment and lifestyle, log on to our website latestly.com).