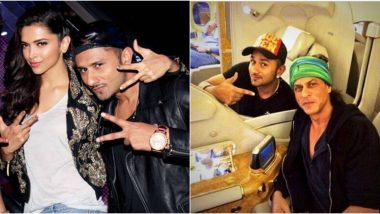 Yo Yo Honey Singh became a star with his songs like "Angrezi Beat", "Din Hai Sunny Sunny", "Lungi Dance"  to name a few. But, it all came crashing down and the rapper took a sabbatical. Upon his return, he talked openly and admitted that he is suffering from bipolar disorder - a step forward in the direction of normalising mental health problems. The singer has now bounced back, and slowly, steadily, is producing good music. In a new interview with Pinkvilla, Honey Singh talked about his struggle and revealed that Deepika Padukone and Shah Rukh Khan supported him. Yo Yo Honey Singh's Latest Body Transformation Pictures Will Leave You Stunned.

"People asked me where I had disappeared for two and a half years. So then I felt it's important to speak up. I was unwell and I got well. I remember making "Dheere Dheere" for Hrithik Roshan during that phase and it turned out to be the biggest hit at that time," he said.

"People spread rumours about me, that I am in some rehab. There was nothing like that. For almost 2 years, my treatment took place at my home. And you won't believe, I did not step out of my house for one and a half years," he said. Yo Yo Honey Singh Birthday: From Angreji Beat To Makhna, These 5 Tracks By Him Will Get You Grooving (Watch Video).

He added that his family and friends took care of him. "In fact, there are many people from the industry who supported me -Shah Rukh bhai and Deepika Padukone. Deepika has also been through a similar phase, so she shared a Delhi based doctor's number with my family for me. They all prayed for me to get well and main theek ho gaya," Honey Singh revealed.

In August 2017, on the sidelines of making a comeback, Honey Singh had told the press, "The last 18 months were the darkest phase of my life, and I wasn't in a state to talk to anyone. I know there were rumours that I was in rehab (for drug overdose), but I was in my Noida house throughout. The truth is I was suffering from bipolar disorder. It went on for 18 months, during which I changed four doctors, the medication wasn't working on me and crazy things were happening."

(The above story first appeared on LatestLY on Sep 11, 2020 10:45 PM IST. For more news and updates on politics, world, sports, entertainment and lifestyle, log on to our website latestly.com).