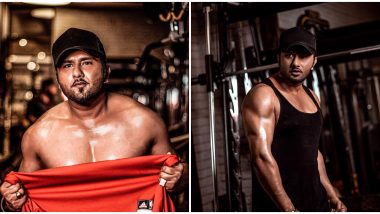 Rapper Yo Yo Honey Singh is trending on Twitter. He has not released a new song. Neither he has landed in a new controversy. This time, India's favourite singer is making buzz on the internet for a very inspiring reason. Honey Singh hit the gym and worked out and now we have the results. The stunning body transformation that he has gone through has left the internet awestruck. The netizen are going to be talking about him for a few days now. Moscow Suka Out Now: Yo Yo Honey Singh and Neha Kakkar's Bilingual Collaboration With Russian Singer Ekaterina Sizova is A Trippy Number (Watch Video).

Yo Yo Honey Singh has shared half a dozen pictures of him sweating it out in the gym. He has not posted a completed shirtless picture, yet. We are going to take it as work in progress. But the bulging biceps will sure inspire you to take care of your physical health.

Last pic for today to finish the grid. Much love to all my friends and fans for the love and support. Keep loving keep blessing!! #yoyohoneysingh #yoyo #transformation

Guru Randhawa Praised The Following Picture By Calling It Incredible

Yo Yo Says That This Is Lockdown Me Ki Gayi Mehnat

Here Is Another Pic

Hands Down, The Best Pic

And...Last But Not The Least

Yo Yo Honey Singh had been working out at his home for the past few months. We brought you an update regarding it a few weeks back. He has shared videos and pics of his fitness regime.

The past couple of years were troublesome for the rapper. He had been MIA for almost 18 months before making a comeback in 2016. After his return, he opened up, revealing that he is bipolar and his alcoholism made things worse. He had gained some extra weight during the time, which he has now kicked off. Way to move forward. Three cheers for Honey Singh.

(The above story first appeared on LatestLY on Jul 02, 2020 09:51 PM IST. For more news and updates on politics, world, sports, entertainment and lifestyle, log on to our website latestly.com).