Did You Know Aamir Khan Asked Shah Rukh Khan to Step Into His Shoes for Rakesh Sharma Biopic, Salute?

From calling names and pulling each other down before the media, Aamir Khan and Shah Rukh Khan's relationship has definitely changed a lot over the years. The once arch rivals are now helping each other out on work front. Guess Bollywood's No.1 game no longer matters to the Khans. 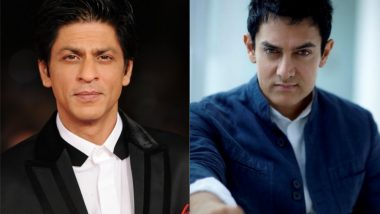 Shah Rukh Khan and Aamir Khan’s war of words have often made headlines in the past. Their recent friendship has surprised many too. However, not many know that Aamir Khan was the one who suggested Shah Rukh to take up Rakesh Sharma biopic, Salute, a movie with director Mahesh Mathai, that the actor was originally supposed to work on. SRK obliged and stepped in for the part, but we hear that the film will now be rechristened. Interestingly, Priyanka Chopra was on board along with Fatima Sana Shaikh for this film. However, with SRK replacing Aamir, we wonder if along with the title the casting too will be revamped?

We bet, fans of the two Khan, who often war online would be surprised to see how the senior actors are actually suggesting each other work and even taking the other’s suggestions. Apart from Salute, Aamir Khan was supposed to produce Gulshan Kumar biopic, Mogul and reports suggested that the actor eventually even planned to act in the movie. However, when the #MeToo movement hit Bollywood, Aamir’s association with Mogul became questionable especially because not just director-writer Subhash Kapoor was accused of sexual misconduct, but producer Bhushan Kumar was also embroiled in controversy following allegations of exploitation.

It seems that the makers in a bid to woo AK back approached Rajkummar Hirani to helm the project. There was no confirmation from either party regarding these reports. In fact, there’s no update if Aamir is still associated with Mogul or if the actor has quit the project.

Aamir’s recent film Thugs Of Hindostan with Yash Raj Films, that brought him and Amitabh Bachchan together on silver screen for the first time got a lukewarm response from the audience. The movie was badly slammed by critics and became a butt of jokes on social media too. The box office collections weren’t impressive either. The actor we now hear is planning to immerse himself in the preparations of his dream project, Mahabharata.

When rumours suggested that SS Rajamouli was planning to pen Mahabharata after the humongous success of Baahubali, buzz was that the filmmaker had approached Bollywood biggies like Aamir Khan and Amitabh Bachchan. Both Rajamouli and Aamir denied these reports, however, Khan did confirm that he has always dreamt of playing Krishna on screen. And if insiders are to be believed then the actor will be portraying his dream role soon.

Coming back to Shah Rukh and Aamir’s new camaraderie, looks like the senior brigade has realised the need to stand by each other instead of fighting each other, especially with the new batch of talent coming in and taking over the positions once these actors were eyeing for.

(The above story first appeared on LatestLY on Nov 22, 2018 08:58 PM IST. For more news and updates on politics, world, sports, entertainment and lifestyle, log on to our website latestly.com).