Ganpath is an out-and-out futuristic venture with Mumbai serving as the major backdrop for some important sequences. The audiences will see the futuristic version of the island city nearly 70 to 80 years into the future 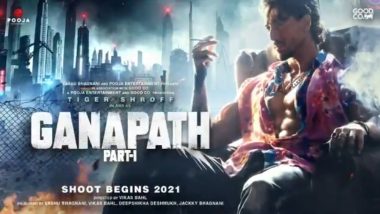 For the unversed let us inform you that Ganapath is the title of an upcoming action movie to be helmed by filmmaker Vikas Bahl. The director is known for his 2014 successful venture Queen starring Kangana Ranaut. And now fans are looking forward to Bahl's collaboration with Tiger. Mounted as the most expensive film Tiger has ever featured in, Ganapath will be high on style and action, we hear. The film is bankrolled by Vashu Bhagnani and Pooja Entertainment.

No wonder Tiger had released the motion poster of the movie  on his Instagram account to express his excitement over this multi crore budget venture, “This one is special for me, and especially for you guys! Presenting #Ganapath - get ready for more action, thrill and entertainment!” wrote Tiger. The movie features the 31-year-old star the titular role of Ganapath and will be shot majorly in Far East Asia. Tiger Shroff Shows Off His Abs in Dabboo Ratnani’s 2021 Calendar Shoot (View Pics)

"This is an out-and-out futuristic venture with Mumbai serving as the major backdrop for some important sequences. The audiences will see the futuristic version of the island city nearly 70 to 80 years into the future. Naturally, the film will be replete with special effects and the estimated budget is very high for the post-production as well," informed our Khabroo. Tiger Shroff Tries To Lift 140 Kg Weight, Inspired By Mirabai Chanu's Silver Win At The Tokyo Olympics 2020 (Watch Video)

While we gathered that Ganapath will be shot in a variety of foreign locations, the prominent locales being Far East Asia, Thailand, Singapore, Hong Kong and Malaysia, a recent development suggests that some of the Indian ghettos in these countries will serve as a backdrop for the story to unfold. We also hear that due to torrential rains he Mumbai, the Ganapath's schedule suffered a great deal, that's when the makers thought to get the shoot done in Far East Asian locales.

"Some sequences are now shifted to Singapore and Malaysia. Indian ghettos will be digitally recreated to give the feel of the futuristic Mumbai to suit the demands of some high on action sequences," concluded the source.

(The above story first appeared on LatestLY on Jul 30, 2021 05:39 PM IST. For more news and updates on politics, world, sports, entertainment and lifestyle, log on to our website latestly.com).