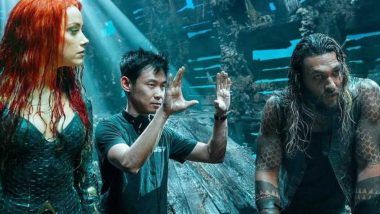 The main panels of the DC FanDome event gave us some exciting updates about the upcoming projects. We got to see brand new footages of The Batman, Wonder Woman, The Suicide Squad. Concept art for The Flash was dropped. But the event was light on information about Aquaman 2. The main star Jason Momoa was not even present. Directo James Wan made an appearance alongside Patrick Wilson, which confirmed his return as the Ocean Master in the upcoming film. Will he continue to be the villain? No idea. Although, the filmmaker has talked about the tone of the next. James Wan's Aquaman Gets an Animated Miniseries To Be Streamed on HBO Max.

Aquaman was a breakout film in the DC universe. It earned more bucks than anyone anticipated. Even the studio didn't predict that it will be the highest-grossing venture in the DCEU. Aquaman was bright with vibrant colours, unlike the past DC films with darker colour palettes and tones, and most of them left you adjusting your screen settings for brightness and contrast. It was also the most fun movie of all.

At the FanDome panel, James Wan said, "The second one is a little bit more serious, a little bit more relevant to the world we’re living in today. That’s where it wants to go."Jason Momoa Birthday Special: 5 Lesser-Known Things About the Aquaman Star That Will Make You Love Him Even More.

Earlier, James Wan has also said that there will be a tinge of horror in the upcoming film. Of course, Wan is famous for his horror movies like Insidious, The Conjuring and Saw. In fact, Aquaman spinoff The Trench is in development. Talking about Aquaman 2, Wan has said, "Just like the first movie had a touch of my horror sensibility in it, in regards to the Trench sequence, I would say there'll be a little bit of that in this next one. I think it's something that's a big part of who I am, and it just naturally comes out in these kinds of films."

"And especially a movie like Aquaman, you know where the story takes place in these underwater worlds that can be very scary. So naturally, my love for the horror genre just means that I latch myself to these scenes and try to give them a little bit more of my scary sauce," he added.

(The above story first appeared on LatestLY on Aug 23, 2020 04:17 PM IST. For more news and updates on politics, world, sports, entertainment and lifestyle, log on to our website latestly.com).