Avengers: Endgame Director Russo Brothers React to 'Snyder Cut' and Reveal if Marvel Ever Interfered with Their Vision

Russo Brothers in their new interaction reveal if Marvel ever interfered with their vision and if they support Zack Snyder's Justice League. 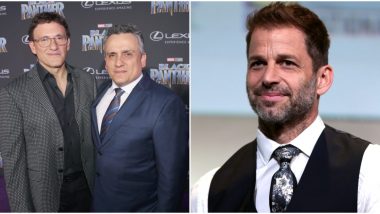 Zack Snyder getting a chance to work on Justice League and complete his vision was a miracle in itself. Imagine the head honchos at Warner Bros studio giving you a platform to showcase your vision, one more time! Like all of us, Snyder never believed that he'd get a second chance but thanks to DC's die-hard fand who started an online petition demanding to see his cut, he was able to witness the impossible. Of course, the petition was also backed by the film's lead stars including Jason Momoa and Ezra Miller who voiced their opinion on the release of Snyder cut. Forget Justice League Snyder Cut! 11 Bollywood Movies Whose Director’s Cut Fans Should Start Campaigning for Right Now!

Zack Snyder's vision of Justice League is finally nearing its completion and we'll be able to catch it on WB's OTT platform, HBOMax in 2021. And while there have been talks about how studios manipulate a director's vision, Russo Brothers, who helmed one of the most successful projects of 2019, Avengers: Endgame beg to differ. Speaking if Marvel ever interfered in their vision, Russo in their conversation with ComicBook.com said, "We have been very, very fortunate in our careers that everything we did for Marvel, we would call our director's cuts. They were very gracious and deferential, and very supportive of our vision for those movies, and there's nothing sitting on the editing room floor that we suddenly want back into those films. We worked very hard at what the current cut of those movies are, so we're very fortunate to have released our director's cut on all four of those film."

However, they are excited for Zack Snyder who was able to get his vision back on track. "I think it's always great when a director's original vision can find its way to the screen," they said when asked about Justice League getting a Snyder cut. Zack had to exit DC's ambitious project for personal reasons and Joss Whedon was roped in as his replacement. While the movie was already in post-production, Whedon added his own take thereby making it tonally very different. Justice League: Zack Snyder Shares First Terrifying Look of Darkseid From Snyder Cut That Will Release On HBO Max (View Pic).

While fans were disappointed to see the final outcome, they are finally relieved and looking forward to seeing what Zack had in store for them. Let's hope he doesn't disappoint.

(The above story first appeared on LatestLY on Jul 08, 2020 04:48 PM IST. For more news and updates on politics, world, sports, entertainment and lifestyle, log on to our website latestly.com).