Warner Bros was not initially keen on bringing back Henry Cavill's cameo as Superman. 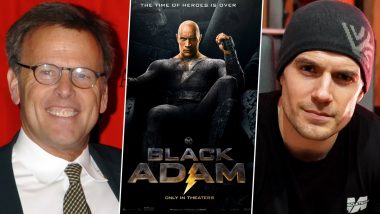 Dwayne Johnson, who is celebrating the success of Black Adam, fought hard for Henry Cavill's cameo as Superman as Warner Bros was not initially keen on bringing back the actor. In a video posted on Twitter, the DC star said that he wanted to establish Black Adam "as the most powerful, unstoppable force in the DC universe," reports Deadline. Black Adam New Poster and Release Date: Dwayne Johnson's Superhero Film From DC Universe to be Out in 2021.

Within minutes of being released from his tomb (prison) after 5,000 years, we establish #BlackAdam as an unstoppable, brutal and violent force. And a wicked sense of humor 💀#ManInBlack https://t.co/bstUvPu8iF

To manage the latter, Johnson said: "We have to bring back the most powerful, unstoppable force of all time in any universe. And you guys know who I'm talking about? Of course, that is Superman. And that's Henry Cavill."

"There was no way, there's no viable logical way that you can attempt to build out the DC Universe without the most powerful force and the greatest superhero of all time sitting on the sidelines. It's impossible to do," he added. Jungle Cruise Full Movie in HD Leaked on TamilRockers & Telegram Channels for Free Download and Watch Online; Dwayne Johnson, Emily Blunt’s Disney Film Is the Latest Victim of Piracy?

Johnson continued: "It all comes back to where Superman you have to have Superman in the mix. So that's why we fought hard to bring Superman back, Henry Cavill, and there was no other Superman, by the way, to bring back Henry Cavill is our generation Superman and in my opinion, the greatest Superman. And I mean that respectfully to the other actors, especially Christopher Reeve, but the greatest Superman of all time."

Deadline notes that with Cavill back in the DC Universe, the Black Adam star said that they can "now build out the DC Universe, properly, strategically and smartly." Johnson also pointed out that since the film came out, the "hierarchy of power in the DC Universe has changed and, of course, now we have new leadership at DC and at Warner Bros."

(The above story first appeared on LatestLY on Nov 28, 2022 05:03 PM IST. For more news and updates on politics, world, sports, entertainment and lifestyle, log on to our website latestly.com).