Christopher Nolan's Tenet Gets a New Release Date 'Again', Will Now Release in Select Countries on August 26 and in USA on September 3 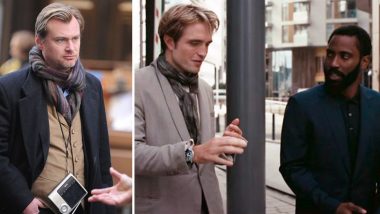 Christopher Nolan's Tenet is determined to become the first Hollywood release post-COVID-19 era. The much anticipated time inversion thriller that stars John David Washington in the lead role has so far been delayed multiple times. The movie was originally scheduled to release on July 17, but was pushed back to July 31 and then August 12. While Warner Bros is looking forward to releasing it in theatres, the fact that the USA is still struggling with a steep rise in the number of coronavirus cases was crushing all their hopes -  until today. As per the new update, the studio has now decided to go ahead with its new release plan that involves the film hitting the big screens in select few countries. After Christopher Nolan's Tenet, Disney Delays Mulan Indefinitely, Also Postpones the Upcoming Star Wars Movies.

As per new reports, Tenet will now release in Australia, New Zealand, Canada, France, Germany, Italy, Egypt, Turkey, Korea, Russia, Spain & the UK on August 26 and 27, 2020. The choice to omit American territories was made keeping in mind the country's current struggles. However, the makers are determined to release it on the Labour Day Weekend. Besides, they are also open to the idea of releasing the film in certain US cities on September 3. This way, they can ensure that theatre chains operational in less affected cities can try to get their businesses back on track. Tenet: New Posters Of the Christopher Nolan Film Featuring an Intense John David Washington Released Ahead of Its August Release.

Countries Where Tenet Will Release on August 26

Coming to Indian screens, it's still unclear if it will premiere at the same time as its Asian counterparts like South Korea and Japan. While there are rumours that theatre chains will be allowed to resume their workings from August 1, an official confirmation on the same is awaited.

Nolan's Tenet will be hopefully followed by Disney's Mulan and Marvel's The New Mutants.

(The above story first appeared on LatestLY on Jul 27, 2020 11:12 PM IST. For more news and updates on politics, world, sports, entertainment and lifestyle, log on to our website latestly.com).