Domhnall Gleeson Birthday Special: From Ex Machina to About Time, 5 Movies of the Star Wars Actor That You Should Definitely Check Out!

Acting in some of the most influential movies of the last decade, Gleeson has had a really fun career. From Ex Machina to Star Wars: The Force Awakens, he has been part of huge franchises and some really good small films. 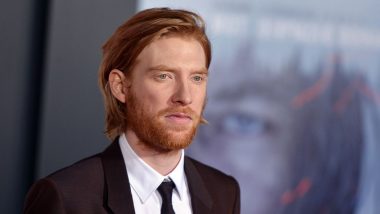 Being the son of Brendan Gleeson and getting into acting, you would expect Domhnall Gleeson to constantly live under his father’s shadow. But no, he has transformed himself into one of this generation’s best actors. Domhnall Gleeson’s career truly has been a treat to watch, and he has definitely become quite the actor to see on the screen. Having the power to have every eyes transfixed on him while on screen, this is one actor who’s performances you don’t want to miss. The Patient: Star Wars Alum Domhnall Gleeson to Star in FX Comedy Series Alongside Steve Carell.

Acting in some of the most influential movies of the last decade, Gleeson has had a really fun career. From Ex Machina to Star Wars: The Force Awakens, he has been part of huge franchises and some really good small films. So, to celebrate his 39th birthday, let’s take a look at five of his best movies. Frank Of Ireland: Star Wars' Domhnall Gleeson and His Brother Brian to Star in Amazon's Comedy Show.

This sci-fi romantic drama is one that is filled with powerful performances and a touching story. It sees a man constantly travelling back to the past in the hopes of making his future better. Gleeson and McAdams make this movie extremely enjoyable to watch and their chemistry is wonderful.

This epic survival film sees Leonardo DiCaprio play the role of Hugh Glass and details his experience in 1823. It’s an absolutely bone chilling film that needs to be experienced in the best way possible. Gleeson plays the role of Andrew Henry here.

There are very few films that manage to be some huge events, and Star Wars: The Force Awakens was one of them. With the First Order on the rise, new and old heroes must band together to take this evil down. Gleeson plays the role of Hux, and his performance here at time can feel very intimidating as he gives a great speech.

The best way to describe Mother! would be that it’s like watching an anxiety attack unfold over the course of two hours. Having extremely heavy religious symbolism to it, this is a movie that you should definitely check out to see as it features some really strong performances.

Ex Machina comes from the brilliant mind of Alex Garland and is an intense and gripping watch. After a programmer is invited to his CEO’s house to take part in the Turing test of an android, he quickly learns that there is something fishy going on. It’s a harrowing watch that has great performances from Gleeson, Oscar Isaac and Alicia Vikander.

Domhnall Gleeson truly is an actor to keep a lookout for and we can’t wait to see what he does next. With this, we finish off the list and wish him a very happy birthday.

(The above story first appeared on LatestLY on May 12, 2022 09:10 AM IST. For more news and updates on politics, world, sports, entertainment and lifestyle, log on to our website latestly.com).