The Emmy-winning British drama series Downton Abbey now has a movie with the same name. With celebrities from the TV series reprising their role in the movie, helmed by Michael Engler, here's our review of Downton Abbey. 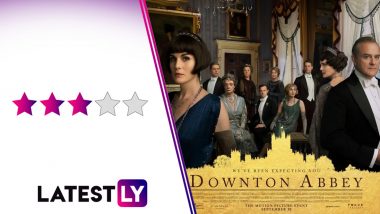 You might probably be under the impression that if and only if you watch the hit Brit-drama series Downton Abbey, will you be able to grasp the story or even the humour. However, that is something you definitely don't have to worry about. Barring some of the drama which directly comes from the series, the Downton Abbey is a sweet consolidated version of the TV series which you can enjoy. But does it do justice to the TV series that managed to snag several Emmys for its dry British humour and interesting plot twists? Well, read on to check out our review of the movie.

Robert James-Collier on His Up-Coming Downton Abbey Film: It Ties Up a Lot of Loose Ends

The movie version of Downton Abbey once again takes us to the 1927 and the plot centres around the arrival and stay of King George V (Simon Jones) and Queen Mary (Geraldine James). The royals basically choose Downton Abbey for their tour and decide to be hosted by the Crawley family. Obviously, the Crawley family with their diverse members and their loyal servants are over the moon to host and greet their royal guests. Once again, they prepare the Abbey for one final guest before leaving the fate of the household in a rather open ending. The frantic hustle-bustle of the loyal servants of Downton Abbey has been beautifully captured while the Crawley family members continue to marvel each other with their own take on matters at hand.

The most commendable thing about the movie is how director Michael Engler has sustained the essence of the TV show in the movie. Sure, the plot was a little too long for a common man's interest span. However, with the way, the Abbey stands tall in the movie while the caretakers of it find their own paths in life is very well done. The one thing that usually concerns a filmmaker who is trying to adapt a TV series into a full-length feature film is to bring about the right kind of balance between the two kinds of directing. Not to mention how a lot of elements need to be reduced and special reservations need to be given to the larger picture rather than fixating on the small details. Often filmmakers do get carried away and try to bundle up everything that they have experienced in the TV show to be felt by the moviegoing audience too. This tends to bring the movie to its downfall.

However, Downton Abbey played a rather safe game by ensuring that they do not fall in the pit of overlapping everything from the show. Instead, they held onto a few episodes of what needs to be done and how it needs to be tackled. And they went to do just that! Perhaps that's why for the first and first half of second half (hope you're keeping up), you would be hooked to the movie. Of course, it soon becomes a bit of a task to keep up with as the story takes a languid phase. Nevertheless, it is a film that stays true to the show and even offers the right kind of service to its fans. Speaking of the ensemble cast, handpicking a few of them to state that they did a good job is beyond us. Every one of them did their part diligently without faltering as the entertainment continued. Right from Maggie Smith's dry Brit humour to Imelda Staunton's poise persona to Michelle Dockery's headstrong attitude, they all stood out brilliantly.

It was exceptionally exciting for Harry Potter fans to see Maggie Smith and Imelda Staunton (who played professor Minerva McGonagall and Headmistress Delores Umbridge) share a screen together. There were a few interesting plot twists with various individuals one wouldn't have expected to turn a new leaf, having done the same. Considering it is kind of a conclusion to the Downton Abbey series, it seemed like the filmmakers played rather too safe. As an entertainer, the film definitely did its job. We can't help but notice how the second half only seemed to be a stretch of Engler trying to tie the loose ends to bring the ideal conclusion to all the pivotal characters. What started at a good pace soon did falter as the second half took over.

- Brilliant performance by the ensemble cast

- Abrupt ends for a handful of characters

- Some conflicts were not strong enough

- A safe and forgettable plot

Downton Abbey's movie is definitely comforting a cute with it's Brit wit and plot twists. However, it still seemed a little bit underwhelming and the pace certainly brought down a lot of morale. The languid pace did leave me a little anxious for we all know what's coming for us. Nevertheless, despite that, Engler did manage to put up a good show with a befitting end. Hence, if you are a fan of Downton Abbey, you must watch the movie. And if you aren't a fan, you don't have to worry about it, you'll still have a good time.

(The above story first appeared on LatestLY on Oct 16, 2019 08:56 PM IST. For more news and updates on politics, world, sports, entertainment and lifestyle, log on to our website latestly.com).