Guardians Of The Galaxy Vol. 3: James Gunn Reveals when He'll Start Shooting the Sequel and Fans are in for Some Disappointment

Don't expect an update on Guardians of the Galaxy Vol. 3 anytime soon! 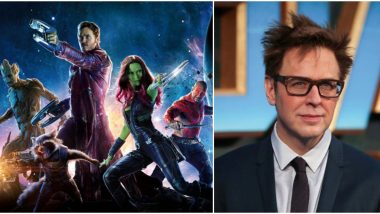 Guardians of the Galaxy Vol. 3 is very special to all its fans for it could be the last outing that sees all the Guardians together. While Marvel has some plans for few of its GoTG characters, Rocket, in particular, the studio isn't keen on narrating the team's adventure stories or so it seems. James Gunn after getting fired by Disney is returning to helm this sequel but the shooting of which is not bound to start anytime soon. Confused About Thor: Love and Thunder and Guardians Of The Galaxy Volume 3's Timeline in MCU? James Gunn Has the Answer.

Gunn took to his Instagram account to share a picture of a Fuggler Drax doll and a fan was quick to ask him an update on Guardians of the Galaxy 3. While the director could have easily ignored the fan's questions, he instead preferred answering him or should we say he preferred ruining his Christmas instead. He simply said, "It won’t start filming for a year or so.” Yup, there goes all your excitement to see leaked pictures from the movie's sets. An insider, Charles Murphy had earlier suggested that GoTG 3 may hit the screens in 2023, so its shooting may commence in 2021 after Gunn wraps his work on DC's Suicide Squad sequel.

Speaking about this sequel, an earlier report in We Got this Covered suggested that the Star-Lord and his team will fight not one but two villains in it. As per a report, High Evolutionary who's also the creator of Rocket will face the Guardians and fight them to get back his creation. Though it's too early to discuss his intentions, there are high chances that the same scientist will be one of the two villains in the movie's new sequel along with Adam Warlock. While Avengers: Endgame saw Thor teaming up with Guardians for their next expedition, we wait to see if the sequel has his inclusion.

(The above story first appeared on LatestLY on Dec 24, 2019 06:51 PM IST. For more news and updates on politics, world, sports, entertainment and lifestyle, log on to our website latestly.com).