Marvel is keen on proving how two is a company! The next instalment of Guardians of the Galaxy will see the team fighting not one but two major villains. 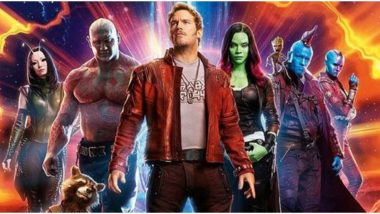 Guardians of the Galaxy Volume 3 will have two villains (Photo Credits: Instagram)

As James Gunn is still busy with Suicide Squad sequel, he's also prepping up for his baby, Guardians of the Galaxy, Volume 3. While its screenplay is ready-to-go, the work on Marvel's next instalment will only begin when Gunn is done with his directorial duties for DC's next. Till then, be prepared to read one too many gossip reports, some of which may eventually come true. To begin with, a new story suggests how Guardians of the Galaxy 3 will have not one but two main villains. Confused About Thor: Love and Thunder and Guardians Of The Galaxy Volume 3's Timeline in MCU? James Gunn Has the Answer.

Yes, we aren't kidding when we say that Star Lord and his team will have to fight two big villains in the series' next outing and it will majorly revolve around Rocket Raccoon. As per a report in We Got This Covered, a cosmic scientist, High Evolutionary who's also the creator of Rocket will face the Guardians and fight them to get back his creation. Though it's too early to discuss his intentions, there are high chances that the same scientist will be one of the two villains in the movie's new sequel.

The second antagonist is Adam Warlock, a powerful character belonging to the MCU. If you go back in time and rewind Guardians of the Galaxy 2's post-credits scene, you'll remember Ayesha creating him to destroy the Guardians. So there're chances that the movie will follow the same route and show Warlock fighting Star Lord to seek his revenge. Interestingly, Warlock even meets High Evolutionary and Thor in Marvel comics. This would explain them collaborating together to defeat the Guardians and even Thor who joined the gang and boarded the spaceship towards the end of Avengers: Endgame. I’m Enormously Excited About Directing ‘The Suicide Squad’, Says James Gunn.

It's definitely too early to talk about these details as the filming isn't expected to start anytime before 2021. So let's keep our fingers crossed and hope for everything best to happen.

(The above story first appeared on LatestLY on Nov 29, 2019 04:00 PM IST. For more news and updates on politics, world, sports, entertainment and lifestyle, log on to our website latestly.com).