Incredibles 2 Movie Review: More Than Elastigirl or Mr Incredible, It Is Little Jack-Jack Who Makes This Animated Film Entertaining

Here's our review of the animated superhero film, Incredibles 2. 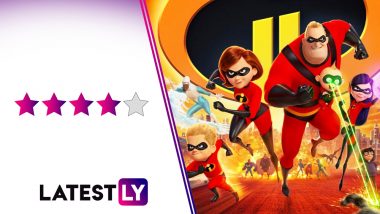 What happens when a family of superheroes is forced to do a role-reversal? The man of the house takes up the daily chores as the woman of the household takes up earning the bread and butter? Well, this movie is more than just elders of the family swapping roles and it's an entertaining ride. It keeps you hooked on to the screen right from the beginning. We saw a new entry of little Jack-Jack in the trailers already. Honestly, for me, the little baby was the most entertaining in Incredibles 2. Every scene with Jack-Jack in it will make you laugh, smile and go all 'Aww'.

Though the film suffers from a weak plot and story, Jack-Jack and the other kids make up for it. It's easy to predict who is going to turn out to be the villain in this animated superhero film but thankfully, the motive is not what you'll think it is. The motive will surprise you a little bit but apart from that, there is nothing too original in the story. Elastigirl is seen hogging most of the attention from the media inside the film leaving Mr Incredible with babysitting duties at home. No matter how much he despises it, he agrees to it for everyone's sake.

The action sequences and animation are simply perfect. In addition to the existing superhero family that the Incredibles is, you'll see more superheroes with unique special powers in the movie. There are a lot of scenes in the film that will make you laugh and you'll especially love Edna!

- The humour element is on point and not overused

- Action sequences and animation are on point

- It's a visual treat

- The story/ plot of the film is too weak. It was too predictable.

- It was unclear whether Mr Incredibles was upset that he couldn't be the national hero instead of Elastigirl or he just thought he was better than her.

Incredibles 2 is entertaining, fun and a laughter riot in a couple of scenes. It's a must-watch with your family this weekend. Watch and tell us what you think in the comments below and stay tuned with us for more.

(The above story first appeared on LatestLY on Jun 21, 2018 12:37 PM IST. For more news and updates on politics, world, sports, entertainment and lifestyle, log on to our website latestly.com).