Incredibles 2 Trailer Out: Elastigirl Fights the Crime as Mr Incredible is the New Homemaker

The movie is based on the life of Parrs, a family blessed with superpowers. Its prequel, the first in the series, was released in 2004. 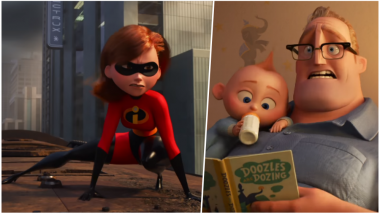 London, February 15: Disney has released the first trailer for its much-awaited film, The Incredibles 2. The sequel is all set to release fourteen years after the first film The Incredibles in 2004. The one-minute-30-second-long footage was revealed during the broadcast of Winter Olympics.

The trailer focuses on the normal life of Parrs, a family blessed with the superpowers - well, as normal as it could be with superheroes running around in the house'. In the trailer, Mr. Incredible can be seen juggling the household chores and managing children while Elastigir concentrates on saving the world.

Watch: Bob Turns into Stay-at-home Dad in The Incredibles 2

The movie is based on the life of Parrs, a family blessed with superpowers. Its prequel, the first in the series, was released in 2004. A huge part of the video focuses on Jack-Jack - the newest and most-loved member of the incredible family.

Watch: Jack-Jack is The Naughtiest Baby Ever

Earlier in November, a comical teaser of the flick showed Jack-Jack exhibiting some unknown powers. In the new trailer, he can be seen teleporting and transforming into a monster. The animated Disney-Pixar film is slated to release on June 15.