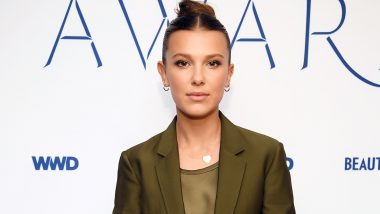 'Stranger Things star Millie Bobby Brown revealed in a recent interview that she achieved a major teenage accomplishment - of getting a driver's license - while living through the coronavirus pandemic. According to E!News, in a new interview with 'W', the 16-year-old star told the outlet, "I got my driver's license in quarantine. It was very strange taking a socially distanced driving test." Enola Holmes Trailer: Millie Bobby Brown’s Clever Teen is Here to Steal Sherlock Holmes’ Thunder With Her Wit (Watch Video)

Getting behind the wheel as a solo driver has been a long journey for Millie, who will next appear as Sherlock Holmes' younger, feisty sister in Netflix's 'Enola Holmes'. Back in May of 2019, Millie shared her excitement over obtaining her learner's permit on Instagram. "I passed! yay ! watch out cuz MBB is on the road...(with a parent or supervisor over 21 with a valid license lol)," the actor joked at the time. Enola Homes First Look: Millie Bobby Brown, Henry Cavill, Sam Clafin Put Their Detective Hats On (See Pics)

However, learning to drive wasn't the only social-distanced activity Millie has been spending time on. During her interview with 'W', Millie shared that in addition to watching a lot of 'Friends' she has been doing "lots and lots of arts and crafts." "My little sister and I painted, did lots of tie-dying, and I think I bejewelled everything in the house," Millie revealed to the magazine.

As per E!News, Millie's Netflix series 'Stranger Things', that catapulted the young star to fame along with actors like Finn Wolfhard, and Sadie Sink was forced to press pause early into the filming of season four due to the coronavirus pandemic--giving Millie ample time to work on her art and driving skills.