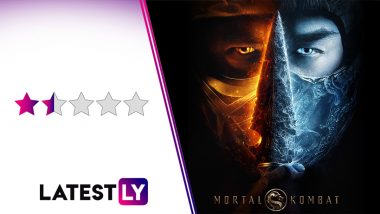 Mortal Kombat Movie Review: Mortal Kombat is an action/adventure film which is based on the videogame series of the same name. It follows an ensemble cast of characters who are selected for a fight tournament to represent Earth and fight for it, and if they lose then Earth will be destroyed. So does Mortal Kombat break the curse of movie adaptations of video games being lackluster? No, far from it. It does have glimmers of greatness in it, but they are quickly squashed by the movie shooting itself in its own foot. Mortal Kombat To Be Available In India Through BookMyShow Stream From June 4.

For the stuff that they got right? The characters are well designed; all have their own specific personality which is true to the Mortal Kombat games. Josh Lawson as Kano, Joe Taslim as Sub-Zero and Hiroyuki Sanada as Scorpion are highlights of the film. Josh Lawson absolutely kills it as Kano with his quippy comebacks, he portrays the character accurately to the games and chews up every scene he is in. Joe Taslim of The Raid fame showcases his amazing talents as a Martial Artist playing Sub-Zero and has some entertaining fight scenes with Hiroyuki Sanada’s Scorpion, which are the high points of the film.

Mortal Kombat also has a lot of fan service for the shippers of the videogame franchise (and its original movie adaptation). From the musical cues of the 1995 Mortal Kombat film to the one liners from the game and some of the fatalities, the new version has it all. But what the fan service detracts it from is its poor plot. Every time you start to notice a problem, the film will just shoehorn a reference from the games to evoke a reaction from the audiences. Rather than going for authenticity in its plot, it’s tricking the viewers with berries in an effort to distract them from its plot problems.

The first misstep that you will notice right off the bat is Lewis Tan as Cole Young. He is nothing but a bland and boring lead for the movie. He brings nothing to the plot but rather acts as a reflection of the audience who doesn’t know anything about the Mortal Kombat lore so that the other legacy characters can drop a bunch of exposition on him. Mortal Kombat is so desperate in wanting to build up what’s coming next that it completely fails in telling the story that it sets out to tell in the first place.

The fighting tournament around which the entire film is based on, never takes place. Rather it’s just built up for the sequel. The plot over here fails in capturing the aura of the games itself, the tournament which is the MOVIE not happening in it is a great example of shooting yourself in the leg. Sure the characters are true to the essence of the games, but what use is that if the plot absolutely fails in utilizing those characters.

The fights which are supposed to be the bread and butter of Mortal Kombat are lackluster in every sense. Aside from maybe the opening and the finale, no other fight is able to bring the adrenaline rush that should have been there. It’s edited choppily, the camera cuts a lot and the scenes aren’t framed properly. All of this just leads to the majority of the fights looking like a mess, which then of course is interrupted by a one liner from the game to bank on the nostalgia of the audiences. Mortal Kombat Review: Critics Believe This Movie Adaptation Of A Hit Video Game Is Strictly For Gore Lovers.

Mortal Kombat is able to soar high in a few moments but it falls flat on its face due to its jumbled and rushed plot which is so concerned with building up a sequel that it fails to convey the plot that it has on its plate.

- Josh Lawson, Joe Taslim and Hiroyuki Sanada are amazing in their roles

- Characters stay true to themselves from the games

- Too much fan service

- Majority of the fights are lackluster

Mortal Kombat never is truly able to reach those heights that It achieves in its opening because of how much the plot detracts from what the franchise stood for. By the end of it Mortal Kombat felt more like a fatality to my eyes than a flawless victory, and if they make a sequel I do hope they take their time in building up stuff and tell a coherent plot. Mortal Kombat is streaming in India on BookMyShow Stream app, Google Play and YouTube on a pay-per-view basis.

(The above story first appeared on LatestLY on Jun 04, 2021 11:40 AM IST. For more news and updates on politics, world, sports, entertainment and lifestyle, log on to our website latestly.com).