Nicholas Sparks Birthday Special: From The Notebook To The Choice, A Look At Some Of His Best Adaptations

As the author gets ready to celebrate his birthday this year, we take a look at some of his best book adaptations in Hollywood. 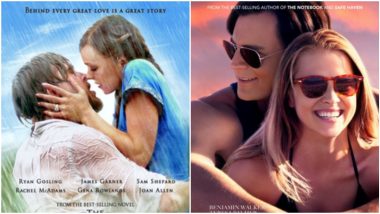 Celebrated American novelist, Nicholas Sparks celebrates his birthday today. While all the bookworms can enjoy a marathon of his books, reading all his best-sellers, movie fanatics can meanwhile have a look at his adaptations. It won't be wrong to say that Hollywood's been obsessed with Sparks' books. Almost all his writing works have been best-sellers. There's something about his writing that connects you with his characters instantly. He's known for his romantic works and an ability to make you emotional with his words. Vanessa Hudgens to Lead 'The Notebook' Musical Adaptation Reading.

As the author gets ready to celebrate his birthday this year, we take a look at some of his best book adaptations in Hollywood. Join us while we marvel at his work.

Ryan Gosling and Rachel McAdams' The Notebook has to find a place in our list of best Nicholas Sparks' book adaptations. The classic story about a young poor boy falling in love with a rich beautiful girl and how their romance goes till the very is what made everyone so emotional in the theatres! The Gray Man: Dhanush Joins Chris Evans, Ryan Gosling’s Netflix Film! Superstar Is ‘Looking Forward To Being A Part Of This Wonderful Action-Packed Experience’.

Julianne Hough, Josh Duhamel and Cobie Smulders' romantic drama is yet another beautiful adaptation of Nicholas Sparks' novel by the same name. It's about how a woman escapes her abusive marriage and falls in love with someone who's willing and eager to offer her a 'safe-haven'.

A typical romantic drama that made us emotional nonetheless. This Nicholas Sparks' adaptation was about two neighbours who fall in love despite being in relationships individually. While the couple ends up getting married, things take a harsh turn when she meets with an accident and slips into a coma. What follows next is how he stays hopeful about her return and if they enjoy a happily ever after in the end.

The Best Of Me

The story is about two teenage lovers who meet after a long time only to realise that they still have feelings for each other. However, what stands out in this novel adaptation is their ultimate connection. After getting killed by his father, Dawson's heart is given to Amanda's son (who's in need of a transplant) and he ends up saving his life and helping her ultimately.

This is more like Love Aaj Kal with storyline going back and forth in time. It's about how a young couple looks up to an old man's romance and how they end up getting inspired by his love story.

We hope the author has a great year ahead. Happy Birthday, Nicholas Sparks.

(The above story first appeared on LatestLY on Dec 31, 2020 10:00 AM IST. For more news and updates on politics, world, sports, entertainment and lifestyle, log on to our website latestly.com).