Oscars 2020: Avengers Endgame Just Created History at Academy Awards but It Is Not Something Marvel Fans Be Proud Of!

Avengers: Endgame ended up having only one nomination in the recently concluded 92nd Academy Awards - for Achievement in Visual Effects. And it is another matter that it even lost that category to Sam Mendes' gritty war drama, 1917. 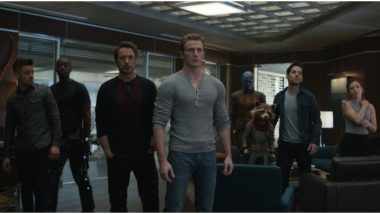 Avengers: Endgame ended up having only one nomination in the recently concluded 92nd Academy Awards - for Achievement in Visual Effects. And it is another matter that it even lost that category to Sam Mendes' gritty war drama, 1917. To rub more salt to its wounds, its fiercest competitor DC Comics took home two Oscars thanks to Joker with Best Actor in a Leading Role (Joaquin Phoenix) and Best Original Score. But the matter doesn't end there. Oscar 2020 Broadcast Viewership Ratings Were All-time Low, 3 million Less Than the Previous Academy Awards.

Fandom, a site that updates its readers and followers with the latest news and developments in Hollywood, recently shared this trivia that Avengers: Endgame may not have won an Oscar. but it made history at the event. As you might be aware, Avengers: Endgame is currently the highest-grossing film of all time, beating James Cameron's Avatar last year. Oscar 2020: Marvel Fans Get Disappointed after Avengers: Endgame Bags Just One Nomination.

Fandom observed that while Avengers: Endgame may have been a global darling and an Oscar-nominated film, but it has also become the highest-grossing film to have not a single Oscar award in its kitty. All the previous highest-grossing films had at least one win to its kitty, with Titanic earning the maximum.

Gone With The Wind - 10 Oscars

The Sound of Music - 5 Oscars

If you looked at the above list, Avengers: Endgame is the only superhero film on there, and maybe that's the one thing that matters more to the Marvel fans.

Interestingly in Oscars 2019, Marvel had something to cheer when Black Panther managed to get seven nominations and won three (Best Costume Design, Best Original Score, and Best Production Design).

(The above story first appeared on LatestLY on Feb 11, 2020 05:17 PM IST. For more news and updates on politics, world, sports, entertainment and lifestyle, log on to our website latestly.com).