Oscars 2022: Beyonce, Billie Eilish and Reba McEntire To Perform at the 94th Academy Awards While Van Morrison Will Not Attend the Ceremony

The location is where sports legends Venus and Serena Williams practiced relentless drills in their youth under the watchful eye of their father, Richard. However, the announcement from the Academy did not specify where the performances would be taking place. 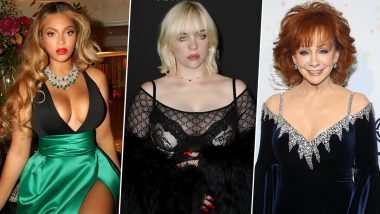 The forthcoming 94th Oscars have announced the musical performers for this year's nominees for best original song, which will include Beyonce, Billie Eilish, Finneas, Reba McEntire and Sebastian Yatra. Four of the five songs will be performed, while nominee Van Morrison, who penned and sang 'Down to Joy' from 'Belfast', was invited but will not attend the ceremony due to his tour schedule. As a result, the song will not be performed on the broadcast, reports 'Variety'. Oscars 2022 Nominations: Dune, Belfast, The Power of the Dog, Drive My Car Lead the Nominees for 94th Academy Awards (See Full List).

Final voting for the 94th Oscars has concluded and the original song race is one of the most competitive of the night. The nominated songs and credited songwriters this year are: 'Be Alive' from 'King Richard', 'Dos Origuitas' from 'Encanto', 'Down to Joy' from 'Belfast', 'No Time to Die' from 'No Time to Die' and 'Somehow You Do' from 'Four Good Days'.

'No Time to Die' has already won multiple accolades this awards season, including the Golden Globe and Critics Choice Awards and last year's Grammy Award for record of the year and song written for visual media. If 20-year-old Eilish wins, she would be the youngest winner in the category's history, surpassing last year's winner H.E.R., who was 23 at the time. The category could also make Lin-Manuel Miranda the latest EGOT recipient, while Diane Warren looks to finally win a long-overdue statuette after 13 nominations. Oscars 2022 Best Picture Nominees: The Power of the Dog, Dune, CODA, West Side Story, King Richard – Which Film Should Win at 94th Academy Awards? Vote Now!

'Variety' exclusively reported that Beyonce's camp was in deep talks with producers to mount a satellite performance of her nominated song, 'Be Alive' -- one that could possibly open the show and broadcast live from the tennis courts in Compton, California. The location is where sports legends Venus and Serena Williams practiced relentless drills in their youth under the watchful eye of their father, Richard. However, the announcement from the Academy did not specify where the performances would be taking place.

(The above story first appeared on LatestLY on Mar 23, 2022 01:22 PM IST. For more news and updates on politics, world, sports, entertainment and lifestyle, log on to our website latestly.com).