Belfast, CODA, Don't Look Up, Drive My Car, Dune, King Richard, Licorice Pizza, Nightmare Alley, The Power of the Dog and West Side Story are all competing for the Best Picture award at Oscars 2022 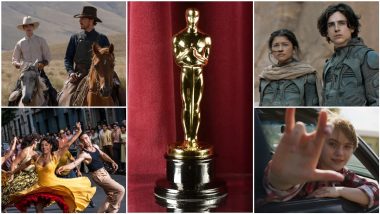 The 94th Academy Awards is happening at Dolby Theatre in Hollywood, Los Angeles on March 27 (early hours of March 28 for Indian viewers). It is going to be a heavily contested one, as the films the Academy is honouring this year are all fan-favourites. As always, there are 10 films vying for the Best Picture Oscar, and though Jane Campion's The Power of the Dog had been a top contender, some other films have gained a lot of traction thanks to their recent wins in other award ceremonies that took place recently. Oscars 2022: Elliot Page, Jennifer Garner, Tiffany Haddish and Others Added to the 94th Academy Awards Presenters List.

So without further ado, let's look at all the Best Picture nominees of Oscars 2022 and ask you, readers, which film will take away the coveted Uncle Oscar that night.

Directed and Screenplay By: Kenneth Branagh

Directed and Screenplay By: Sian Heder

Directed and Screenplay By: Adam McKay

The Power of the Dog

Directed and Screenplay By: Jane Campion

Who Will Win Best Picture at Oscars 2022?

So who will you think will win the Best Picture Oscar at 94th Academy Awards? After voting, share your thoughts in the comments section below.

(The above story first appeared on LatestLY on Mar 22, 2022 12:52 PM IST. For more news and updates on politics, world, sports, entertainment and lifestyle, log on to our website latestly.com).