Kartiki Gonsalves' directorial The Elephant Whisperer has made it into the Oscar race by getting nominated in the Documentary Short Film category. 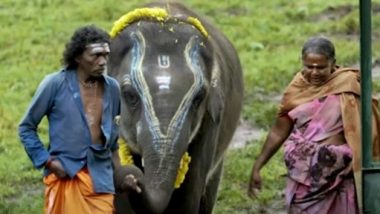 The Elephant Whisperer talks about a Bomman and Bellie, a couple in South India, who devote their lives to caring for an orphaned baby elephant named Raghu, forging a family like no other that tests the barrier between the human and the animal world. The short documentary marks the directorial debut of Kartiki Gonsalves and is produced by Guneet Monga and Achin Jain under the banner of Sikhya Entertainment. Oscars 2023: SS Rajamouli Pens Gratitude Note for RRR Team and Fans as Naatu Naatu Nominated for Best Original Song.

The documentary will landed on OTT platform Netflix on December 8, 2022.Riz Ahmed, who won the Oscar for best live-action short last year, and Allison Williams, who currently stars in the horror hit M3GAN announced the nominees.

(The above story first appeared on LatestLY on Jan 25, 2023 08:09 AM IST. For more news and updates on politics, world, sports, entertainment and lifestyle, log on to our website latestly.com).