Quentin Tarantino's 'Once Upon a Time in Hollywood' Poster: Leonardo DiCaprio and Brad Pitt Sharing The Same Frame Sends The Internet Into a Tizzy!

Touted as a production that has Tarantino's most impressive cast to-date the movie features a galaxy of stars! 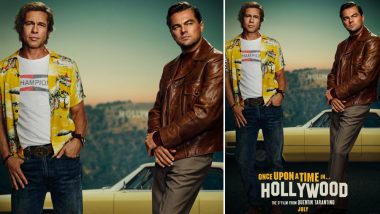 Once Upon A Time In Hollywood Movie Poster (Image Credit: Instagram)

These two Hollywood heavy-weights are perhaps the only two name that the mango people in India take refuge in, when it comes to sharing or boasting about the acumen of Hollywood movies. Naturally, the duo sharing the same frame in the first poster of Quentin Tarantino's forthcoming film Once Upon A Time in Hollywood has sent fans into a tizzy of sorts, in this part of the globe.

The poster does look gorgeous with Leo and Pitt making their super-starry presence felt  with the unmissable retro feel on display. Quentin Tarantino's return to the big screen is arriving later this year.

This is the acclaimed director's take on the infamous Manson Family Murders in 1969. DiCaprio posted the image on his Twitter account only to get fans excited about his new release. Is it Possible to Own Dinosaur Fossils? Leonardo DiCaprio's Interest in Buying 150-Million-Year-Old Bones Upsets Researchers

(The above story first appeared on LatestLY on Mar 18, 2019 08:27 PM IST. For more news and updates on politics, world, sports, entertainment and lifestyle, log on to our website latestly.com).

Comments
Tags:
Brad Pitt Leonardo DiCaprio Once Upon a Time in Hollywood Quentin Tarantino
Comments
You might also like